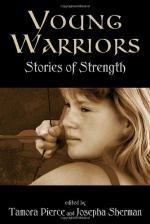 Tamora Pierce
This Study Guide consists of approximately 46 pages of chapter summaries, quotes, character analysis, themes, and more - everything you need to sharpen your knowledge of Young Warriors.

"Perhaps a part of thinking like a warrior was knowing one's limits" (The Gift of Rain Mountain, p. 18).

"In some ways it went against the grain; humans were the enemy, every bit as much as the Creesi" (The Magestone, p. 39).

"Much to Eli's dismay, his parent went by the chronological seasons, not the seasons of the heart" (Eli and The Dybbuk, p. 45).

"The part of her that would have been pleased by his pleading and fear was long one, and with it the part that might have pitied him" (Heartless, p. 67).

"Would all her dreams of duty and glory prove as dry as sand blown over long-dead bones" (Lioness, p. 85).

"My life would be my own, not merely the mirror of some man's great deeds" (Thunderbolt, p. 107).

"The English wished to see a miracle, so when I walked into the colonel's bungalow and proclaimed myself Estella Humbolt, that...

More summaries and resources for teaching or studying Young Warriors: Stories of Strength.