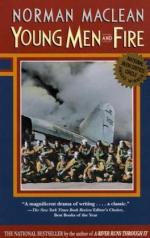 This detailed literature summary also contains Topics for Discussion and a Free Quiz on Young Men & Fire by Norman Maclean.

It was just after August 10, 1949 when Norman Maclean witnessed the Mann Gulch fire and became tied to it. The tragedy that killed 13 of the U.S. Forest Service's Smokejumpers would become a near obsession for the author who would work on finding impossible answers until he became too ill to write any more. The book was published posthumously in 1992, having been edited but not truly altered. That year, it won the National Book Critics Circle Award.

Maclean was at his cabin in Seely Lake, Montana when he learned about the fire in Mann Gulch. As a former member of the U.S. Forest Service, Maclean had to see it for himself. After it was all done, thirteen Smokejumpers from the United States Forest Service had burned to death when a blowup occurred at the top of a ridge. Most of the Smokejumpers were college boys.

Maclean spent decades examining and re-examining events that took place in Mann Gulch over a period of five days. As Maclean knew, the fire would not cease to affect the land and lives of those involved forever but that the fire itself would take years to truly stop burning. At Maclean's last visit to Mann Gulch, the author commented that saplings had just started to grow.

Maclean's journey takes him back to Mann Gulch many times. The author taps into every possible resource in order to find out what might have happened that day. Maclean created a time line of events to the best of his ability. Also created was a chain of events that, despite conflicting testimony, are as accurate as Maclean could fathom.

Almost thirty years later, the families of the Smokejumpers could not talk about the tragedy. The Smokejumpers that died had been memorialized but there was never a real end to the story.

Maclean managed to find and contact the only two remaining survivors, Robert Sallee and Walter Rumsey. Together, the men went back to Mann Gulch where some of Maclean's most important questions were answered.

Sallee had said in an interview that he did not want to revisit Mann Gulch but was obligated. A friend had told him that like it or not, Sallee was a part of history.

Maclean addresses the physical aspects of fire as well. There are several history lessons about the Fire Service as well as the progression of the role of the Smokejumper. In an effort to understand fire and its unpredictable ways, Maclean turned to Fire Behavior science, a field of study that did not truly begin until the 1950s. The reader is treated to thorough and interesting facts about the use of mathematics in fighting fire and how the Mann Gulch fire is responsible for improving the role of the firefighter in both ability and safety.