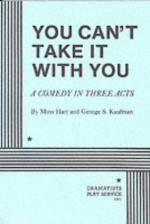 Moss Hart
This Study Guide consists of approximately 42 pages of chapter summaries, quotes, character analysis, themes, and more - everything you need to sharpen your knowledge of You Can't Take It with You.

Harvey, Mary Coyle Chase's 1944 comedy. This play, like You Can't Take It with You, won a Pulitzer Pnze, and tells the story of another classic American eccentric, a charming man who keeps company with a huge, imaginary rabbit named Harvey.

Act One, Moss Hart's well-received 1959 autobiography. This work offers insight into both the Broadway theater at mid-century and the Hart-Kaufman collaboration.

The Man Who Came to Dinner, Kaufman and Hart's 1939 play. This fourth Kaufman-Hart collaboration, like You Can't Take It -with You, depicts a crazy family and a rambunctious social occasion. Some critics consider this to be Kaufman and Hart's best work.

Ah Wilderness!, (1933) by Eugene O'Neill. This nostalgic play, the only comedy O'Neill ever wrote, looks at family life in 1906 Connecticut.

Dorothy Parker's essays, book reviews, and drama reviews from the 1930s can be found in The Portable Dorothy...

More summaries and resources for teaching or studying You Can't Take It with You.

You Can't Take It with You from Gale. ©2005-2006 Thomson Gale, a part of the Thomson Corporation. All rights reserved.