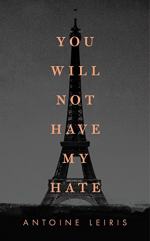 Summary
+Chapters Summary and Analysis
Chapter 1-3 (One Night in Hell-The Ladybug)
Chapter 4-6 (It Could Have Been-The Music Can Begin)
Chapter 7 ("You Will Not Have My Hate")
Chapter 8-10 (The Master of Time-N.)
Chapter 11-13 (Stay Strong...-The Right to Doze)
Chapter 14-17 (Tidying Up Her Things-Mama is There)
Important People
Objects/Places
Themes
Styles
Quotes
Topics for Discussion
Order our You Will Not Have My Hate Study Guide

You Will Not Have My Hate Summary & Study Guide

Antoine Leiris
This Study Guide consists of approximately 25 pages of chapter summaries, quotes, character analysis, themes, and more - everything you need to sharpen your knowledge of You Will Not Have My Hate.

You Will Not Have My Hate Summary & Study Guide Description

You Will Not Have My Hate Summary & Study Guide includes comprehensive information and analysis to help you understand the book. This study guide contains the following sections:

This detailed literature summary also contains Topics for Discussion on You Will Not Have My Hate by Antoine Leiris.

The following version of this book was used to create this study guide: Leiris. Antoine. You Will Not Have My Hate. Penguin Press, 2016.

You Will Not Have My Hate traces the grieving process of Antoine Leiris, whose wife Hélène was killed in a terrorist attack at the Bataclan in Paris. The book takes the form of a journal, beginning with the night of the attack and ending the day after Hélène’s funeral. Significant portions of the narrative focus on the couple’s son Melvil, who is 17 months old at the time of the attack. Soon after Hélène’s death, Leiris explains to his son that she has died, hoping the boy will understand that she will not return, but that their memories of her will remain. Leiris then devotes himself to his son’s care, following his regular routine as much as possible. This is comforting to Melvil and provides stability to Leiris after this tragic event. At times, Leiris is concerned about his ability to parent Melvil alone, but resolves that they will remain a strong family.

Leiris also describes his own grief, often in a more somber tone than the one used to describe Melvil’s activities. The author is frantic when he realizes that his wife may be in danger and then shocked as the reality of her death sets in. Ironically, he is somewhat happy to see her body and confirm her identity, feeling that this is a final opportunity to be with her. Later, he becomes more sorrowful, describing his grief as all-consuming. At these moments, he is most comforted by Melvil and his desire to provide a safe and supportive childhood. The book also contains a letter from Leiris directed at the terrorists who killed his wife. He states they “will not have [his] hate” (51) and refuses to satisfy their desire that he be angry at them. Instead, he is dismissive and chooses to focus on caring for Melvil.

More summaries and resources for teaching or studying You Will Not Have My Hate.

You Will Not Have My Hate from BookRags. (c)2022 BookRags, Inc. All rights reserved.