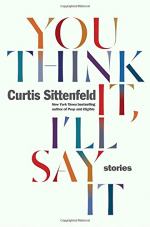 You Think It, I'll Say It Summary & Study Guide

Curtis Sittenfeld
This Study Guide consists of approximately 53 pages of chapter summaries, quotes, character analysis, themes, and more - everything you need to sharpen your knowledge of You Think It, I'll Say It.

You Think It, I'll Say It Summary & Study Guide Description

You Think It, I'll Say It Summary & Study Guide includes comprehensive information and analysis to help you understand the book. This study guide contains the following sections:

This detailed literature summary also contains Quotes and a Free Quiz on You Think It, I'll Say It by Curtis Sittenfeld.

The following version of this book was used to create this study guide: Sittenfeld, Curtis. You Think It, I'll Say It. New York: Random House, 2018.

You Think It, I'll Say It is a collection of ten short stories. In the first story, “Gender Studies,” a gender and women's studies professor named Nell arrives in Kansas City for a conference. She has recently been left by her husband for a younger woman, and she has a sexual encounter with the young driver of her hotel's shuttle van, only to kick him out of her room in a rage when they have a minor disagreement.

In the next story, “The World Has Many Butterflies,” a bored housewife named Julie becomes enamored of her husband's coworker Graham as a distraction from her dull suburban existence. She awkwardly propositions Graham, only to learn later that he, too, is involved with a younger woman.

In “Vox Clamantis in Deserto,” a college student named Dana arrives at Dartmouth feeling friendless and shy. She meets a girl named Rae who has a boyfriend living in another town, and when the two girls go to visit this boyfriend, Dana ends up sleeping with him. She looks back on this experience from adulthood with wry detachment.

In “Bad Latch,” a woman named Rachel observes another woman, Gretchen, at prenatal yoga class. Gretchen wears expensive maternity clothes and references midwives and natural childbirth, and Rachel is annoyed by her apparent smugness. Later, when dropping her baby off at daycare for the first time, Rachel runs into Gretchen again, who comforts her when she cries over her concern about her parenting choices. The women become lifelong friends.

In the next story, “Plausible Deniability,” a man named William conducts an emotional affair via email with his brother's wife, Libby. When Libby puts an end to their correspondence, William feigns indifference, but he is secretly distraught because he has difficulty achieving intimacy with anyone in his life.

In “A Regular Couple,” a woman named Maggie is on her honeymoon with her husband Jason when she runs into an old high school classmate named Ashley, also on her honeymoon. Over the course of several interactions with this other couple, Maggie grows increasingly hostile, but it becomes apparent that she really projecting her frustrations about her relationship with Jason and her professional life onto Ashley.

In “Off the Record,” Nina, a former writer for a women's magazine, arrives in Los Angeles for a freelance assignment interviewing a young actress named Kelsey Adams. Nina leaves her six-month-old baby in the care of a sitter to conduct her interview, during which Kelsey provides intimate details of her recent miscarriage and breakup with a costar. As the morning progresses, Nina receives increasingly frantic text messages from the babysitter who claims that Nina's baby will not stop crying. Nina finally tells Kelsey she must leave, and Kelsey, annoyed by this development, informs Nina that the personal details she disclosed were meant to be off the record. Nina later sees Kelsey on television, telling her story to another interviewer, using the exact same words she used when recounting it to Nina.

Next, in “The Prairie Wife,” protagonist Kirsten becomes increasingly obsessed with a celebrity chef, Lucy Headrick, with whom she had a brief romance at camp as a teenager. Kirsten is convinced that, because Lucy married a man and adopted a homespun, southern-style persona for her career, she is a hypocrite living a lie. Just as Kirsten considers contacting a gossip website to tell the story of her affair with Lucy, she learns that Lucy has come out as bisexual on a daytime talk show. Kirsten realizes that what is really bothering her is the fact that she feels no one will ever desire her with the intensity that Lucy displayed at camp when they were young.

In “Volunteers Are Shining Stars,” narrator Frances works as a volunteer babysitting children at a homeless shelter called New Day House. Frances has obsessive-compulsive disorder, which causes her to wash her hands with extreme frequency and avoid human contact as much as possible. She does not grasp the severity of her problem. When a new volunteer, Alaina, arrives at New Day, Frances develops an immediate dislike for her, which slowly escalates over the course of the story, and is exacerbated by Alaina's good-intentioned mention of Frances' OCD. At the end of the story, Frances' misplaced rage boils over and she attempts to strangle Alaina. Another volunteer pulls the two women apart, and Frances never returns to New Day.

In the final story, “Do-Over,” a man named Clay is contacted by an old high school classmate, Sylvia McLellan. She will be passing through town and invites him out to dinner. The 2016 presidential election has recently occurred, and it reminded Clay of an incident from school in which both he and Sylvia ran for class prefect. After the election resulted in a tie, Clay was made prefect and Sylvia was made assistant prefect. At dinner, it becomes clear that this is exactly what Sylvia wants to talk about, and she rails against the sexism of this decision, something that has clearly bothered her all of her life. Sylvia angrily calls Clay boring, and the two go their separate ways. Later that night, Sylvia calls Clay to make amends and explains that she is dissatisfied with her life and unsure of how to solve the problem. Clay is sympathetic and understanding.

More summaries and resources for teaching or studying You Think It, I'll Say It.

You Think It, I'll Say It from BookRags. (c)2022 BookRags, Inc. All rights reserved.