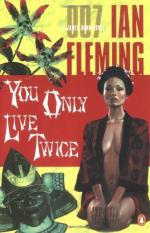 Ian Fleming
This Study Guide consists of approximately 34 pages of chapter summaries, quotes, character analysis, themes, and more - everything you need to sharpen your knowledge of You Only Live Twice.

You Only Live Twice Summary & Study Guide includes comprehensive information and analysis to help you understand the book. This study guide contains the following sections:

This detailed literature summary also contains Topics for Discussion and a Free Quiz on You Only Live Twice by Ian Fleming.

In You Only Live Twice by Ian Fleming, James Bond is dealing with the death of his new wife Tracy, who has been shot to death by his arch nemesis, Ernst Stavro Blofeld. Bond is devastated and trying to pick up the pieces of his old life. Unfortunately, his grief gives way to carelessness and forgetfulness, as he becomes accident prone and begins making mistakes that almost get himself and others killed.

His boss, M, the head of British Secret Intelligence, is close to telling him to "shape up or ship out," but Sir James Molony, known to be the best neurologist in England and connected to the Secret Service advises him to send Bond on an impossible mission that will call all of Bond's talent's to the surface.

Bond is assigned a project in Japan where his mission is to get information about a spy inside of the Soviet Union. His objective is to get information out of the head of the Japanese secret service, Tiger Tanaka. However, Tiger has plans for Bond of his own. After befriending him, he lets Bond in on a secret plan between Japan and Russia involving nuclear material. He then requests for Bond to assassinate Dr. Guntram Shatterhand, the operator of a resort where people went to go on a permanent vacation, otherwise known as the "garden of death."

Bond is put through a training camp that trains him to fit in with the masses. His appearance is changed, and he is given the name of Taro Todoroki. It is while surveying the compound where the suicides take place that he discovers that Dr. Shatterhand is actually one Ernst Stavro Blofeld, the man who killed his wife a mere nine months before. When asked by Tiger if he knows the man in the picture, he makes an instant decision. He decides to deny it and seek his own revenge.

Tiger tells Bond, now Taro, he can only take him so far. So, he is going to have him go to the compound with someone who can complete his training, a twenty-three-year-old, former Japanese movie star by the name of Kissy Suzuki. Kissy helps Bond in his training until he convinces her to help him find the compound. She believes him to be sent by gods to kill Shatterhand to release Japan from Shatterhand's evil grasp. Bond goes along with it.

He gets inside the compound grounds and explores the grounds, although carefully to find out how he can get inside to kill Shatterhand and his wife. It is here that he witnesses the evil firsthand that the garden really can dispense. He sees two different deaths, one involving a man who appeared to be poisoned and threw himself into a lake of piranhas.

Bond sneaks into the castle late the next evening and feels he is home free. He's then caught by a guard patrolling below, knocking him out. He comes to, facing his enemy. Bond still pretends to be a Japanese fisherman until his cover is blown by Irma, Shatterhand's wife.

When confronted as to why he plotted to threaten the world with nuclear weapons, Blofeld, known as Shatterhand, confesses that he is just doing humanity a favor. He believes that he is the moral judge of all nations, and he alone can dispense justice to punish their sinful nature and back them back to reasoning.

Bond and Blofeld engage in a swordfight in which Bond kills Blofeld. On his way to escaping the destruction of the compound, he feels something hit him in the head. When he comes to, he is with Kissy Suzuki and her family, with no memory of himself or anything that happened.

Meanwhile, everyone else believes he has died a hero. Unbeknown to Bond, Suzuki discovers who he is and decides to keep him for herself. She soon becomes pregnant with his child. She hopes he will propose when she announces her pregnancy. However, this is never approached in the book as Bond shows her a piece of paper that bears the name Vladiostok. He wants to know if this has something to do with him. All she can do is agree to accompany him there, and so Bond's saga continues into another story.

More summaries and resources for teaching or studying You Only Live Twice.

You Only Live Twice from BookRags. (c)2022 BookRags, Inc. All rights reserved.