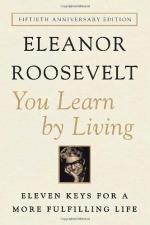 Plot Summary
+Chapters Summary and Analysis
Foreword
Ch. 1, Learning to Live
Ch. 2, Fear-the Great Enemy
Ch. 3, The Uses of Time
Ch. 4, The Difficult Art of Maturity
Ch. 5, Readjustment is Endless
Ch. 6, Learning to be Useful
Ch. 7, The Right to be an Individual
Ch. 8, How to Get the Best Out of People
Ch. 9, Facing Responsibility
Ch. 10, How Everyone Can Take Part in Politics
Ch. 11, Learning to be a Public Servant and Afterword
Characters
Objects/Places
Themes
Style
Quotes
Topics for Discussion
Order our You Learn by Living Study Guide

Eleanor Roosevelt
This Study Guide consists of approximately 31 pages of chapter summaries, quotes, character analysis, themes, and more - everything you need to sharpen your knowledge of You Learn by Living.

You Learn by Living Summary & Study Guide includes comprehensive information and analysis to help you understand the book. This study guide contains the following sections:

This detailed literature summary also contains Topics for Discussion on You Learn by Living by Eleanor Roosevelt.

You Learn by Living by Eleanor Roosevelt is an educational book written by the former First Lady of the United States of America in order to make helpful suggestions in response to letters she has received. Feeling that the sum of the letters she receives asks what she has learned in her lifetime that will help with a given problem, Eleanor Roosevelt writes this book to reach out to a greater number of people with her advice, though she repeatedly emphasizes the fact that one method does not necessarily work for everyone. You Learn by Living is an inspirational book that provides hope for the reader and perhaps the urge to follow Eleanor Roosevelt's advice to become successful.

Eleanor Roosevelt receives many letters asking for her help in solving a difficulty. She stops to think about what she has learned through living and decides that one's philosophy is best expressed in the choices one makes. An avid factor in Eleanor Roosevelt's life is her avid desire to experience everything she can as deeply as she can. She feels that book education alone is not enough; it must be supplemented by the stimulus of exchanging ideas with others. People should never lose interest, but they must understand the meaning of what they look at and adjust their knowledge to the new information in order to continue to learn and grow. Fear is the worst imaginable stumbling block. Overcoming an impossible situation proves to the individual that they can live through anything, while the danger lies in avoiding one's fears. One common fear is being afraid to use one's capabilities. In the long run, courage is easier and more exhilarating. Eleanor Roosevelt offers four tips to making the best use of time: retain inner calm, learn to concentrate on one thing at a time, organize time with flexibility, and use common sense in health for the energy to carry through even the most strenuous day.

A mature person has self-knowledge and knows how to temper praise with negative remarks. Many people fear self-knowledge because they assume it is only about discovering the negative things about oneself, but actually it is mainly about learning one's inner strengths. It is important to accept one's own limitations, as well as the limitations of others. One should never try to change others, as this stifles individuality. A mature person will set their values on things in life that give them satisfaction. Readjustment is inevitable, causing each period of life good only to the extent that a person uses it. People must learn to cope with disasters, such as death which is inevitable and natural. All people have the need to feel useful. Usefulness to others is a sign of love and respect. Being useful is a justification of one's own existence. Although there are many charitable organizations, there are less dramatic, but just as real, needs everywhere.

There is a great problem modernly with the loss of individuality. People are faced with the problem of conforming or not conforming. This problem arises with children, and while it is necessary for parents to explain the reason their children must be different, they should not conform. People's ambition should be to get as much as possible out of life, rather than trying to live up to society's standard of success. People cannot afford to lose their individuality. Everyone also has the need to be recognized as an individual, and to do so, must respect and have interest in other people. It is important to be able to deal with a wide variety of people. When dealing with other cultures and races, it is important to learn and respect their different customs, modes of thought and background. These differences are superficial, while the similarities among all humankind are more important. People create themselves by the choices they make daily, though they often blame their mistakes on others instead. They should regard their mistakes as experiences that will guide them to wiser decisions in the future. It is important to be optimistic because no one has ever achieved anything when they believed they could not.

Politics is the participation of citizens in the government. Citizens' minimum duty is to vote intelligently, and they obtain information to do so through the President, the media, commentators and discussion. It is important to find facts and learn both sides. Politics is not a career for professionals, and it is possible for citizens to accomplish certain things for their children and their community, but it is not enough just to wish for a change. A major key to success in democracy is the individual's responsibility for the well-being of the community. Few people deliberately prepare to become public servants because the future is uncertain and there is less financial reward than in other careers. There are many problems for public servants which come at the high cost of personal sacrifice, and Americans owe our public servants gratitude and respect. At the end of her booknor Roosevelt is filled with misgivings because she has not written anything new, but she decides that it is acceptable since she means well in her advice.

More summaries and resources for teaching or studying You Learn by Living.

You Learn by Living from BookRags. (c)2022 BookRags, Inc. All rights reserved.