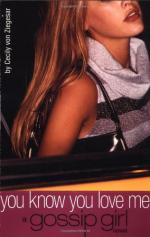 You Know You Love Me: A Gossip Girl Novel Summary & Study Guide

Cecily Von Ziegesar
This Study Guide consists of approximately 27 pages of chapter summaries, quotes, character analysis, themes, and more - everything you need to sharpen your knowledge of You Know You Love Me.

You Know You Love Me: A Gossip Girl Novel Summary & Study Guide Description

You Know You Love Me: A Gossip Girl Novel Summary & Study Guide includes comprehensive information and analysis to help you understand the book. This study guide contains the following sections:

This detailed literature summary also contains Topics for Discussion on You Know You Love Me: A Gossip Girl Novel by Cecily Von Ziegesar.

"You Know You Love Me: A Gossip Girl Novel" by Cecily Von Ziegesar tells the story of a group of young people from the upper east side of New York City. Born to a world of privilege, the young men and women still have to deal with stressful situations in life including romantic relationships, friendships, and getting into college. The highs and lows of their lives are recorded and published to all by an unknown entity who calls herself Gossip Girl.

It's almost winter and the seniors are starting to talk about college. Blair Waldorf is turning 17 and is determined to finally lose her virginity to Nate, but the time never seems right. Things aren't going the way she plans. Her mother decides to marry the bald, fat Cyrus on her birthday. This leaves her with a step-brother to contend with. She also has to get into Yale, which is her only college of choice. Blair has her future all mapped out, with Nate going to the same college. She doesn't know that he's more interested in Brown University or maybe even taking a year off of school to sail around the world with his father.

Dan Humphrey is also a senior. He is madly in love with the beautiful Serena, who used to be close friends with Blair. However, Blair cut off the friendship and made Serena a social outcast after she discovered that Serena and Nate had sex before Serena had gone off to boarding school. Now, Serena is happy to have Dan in her life. She needs a good friend. The two make plans to tour the Brown campus together. This makes Jenny, Dan's sister, very happy since she is in awe of Serena.

Nate and his friends join Serena and Dan, to Dan's great disappointment. During the trip, Serena and Nate reconnect as friends. Blair and her soon-to-be stepbrother, Aaron, drive off to Yale for her interview. During their trip, she smokes some of his all-natural cigarettes. She almost misses her interview when she oversleeps and she bombs it by not thinking clearly. She inadvertently tells the interviewer too many personal details, including the fact that she stole some pajamas for her boyfriend. To compensate, she asks her father to make a donation to Yale.

After the college weekend, Serena discovers that the film she made with Vanessa won first place in the Film Festival. She gives the tickets to Cannes that she won to Vanessa and Jenny.

The wedding plans continue and Blair and Serena get thrown together. Blair continues to ignore the other girl, but Serena doesn't retaliate. The wedding goes off without a hitch, in spite of gossip and rumors surrounding the marriage. At the reception, Blair is determined to connect with Nate, but he has invited Jennifer to meet him at the hotel. Dan talks with Serena and realized that she truly doesn't love him. Vanessa cheers him up and Blair sees Jenny and Nate together. She goes into the ladies' room to cry. Serena finds her and comforts her. They become friends again.

More summaries and resources for teaching or studying You Know You Love Me: A Gossip Girl Novel.

You Know You Love Me: A Gossip Girl Novel from BookRags. (c)2022 BookRags, Inc. All rights reserved.