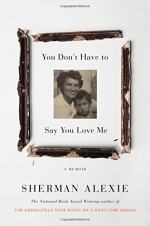 You Don't Have to Say You Love Me Summary & Study Guide

You Don't Have to Say You Love Me Summary & Study Guide includes comprehensive information and analysis to help you understand the book. This study guide contains the following sections:

This detailed literature summary also contains Topics for Discussion on You Don't Have to Say You Love Me by Sherman Alexie.

The following version of this book was used to create this study guide: Alexie, Sherman. You Don’t Have to Say You Love Me. Little, Brown and Company, 2017. Kindle Edition. Note that lines of poetry are indicated by capitalization throughout the memoir and are maintained to emphasize the author's unique poetic style.

From the beginning of the memoir, the reader is brought into the depths of the author’s troubled childhood growing up on the Spokane Indian Reservation in Wellpinit, Washington. Born with hydrocephalus to poverty-stricken, alcoholic parents, Alexie was often the victim of both physical and verbal abuse from family and strangers alike. The core of the novel is centered on the author’s attempt to come to terms with his complex relationship with his recently deceased mother. Though, it is through this reflection that contemporary issues surrounding the rise of racism, violence and ignorance are brought forth as he contemplates the place of Native Americans in a post-Trump America.

The memoir is comprised as a collection of memories woven together in a meaningful way. The author’s usage of lyrical prose throughout the memoir allows poetry to act as a tool of reflection. Though at first it appears disruptive from the flow of the narrative, the inclusion of poetry offers a reprise for the reader, underscoring the process by which humans choose to cope with their grief. For Alexie, writing is his therapy, and he uses poetry to process his relationship to his mother, his culture, and his own sense of self.

Over the course of his life, Alexie has struggled to accept his past, seeking to distance himself from his family and culture. In many ways, this remoteness allows the author to analyze his life from a critical perspective, but it also challenges the validity of the stories he recounts. Alexie is aware that his recollection frequently slips into fictitious tales, blurring the line between fact and fiction, and as a result he refers to himself as the “unreliable narrator of his own life” (10). This element of uncertainly enhances his struggle to come to terms with his recent loss, as so much of his upbringing remains forgotten or unknown.

In addition to uncertainty, repetition plays a significant role throughout the novel, emphasizing various themes or events within the author’s life. The inclusion of the same story multiple times is indicative of his desire to revisit the past in his search for answers. It also signals the importance of various aspects within the memoir including the symbolic role of salmon as representative of the decline of the Native American population at the hands of white colonialists.

Chronologically, the memoir follows the author’s dysfunctional life growing up on the reservation to his eventual move to college and present life as a husband, father, and award-winning author. Amidst this trajectory, he evokes various reminiscences, poems, and personal accounts as a way to contend with the past and seek closure to the physical and mental pain he has undergone.

Overall, the memoir offers a look at the author’s struggle to overcome his past that has been defined by a complicated relationship with his mother, alcoholic father and plaguing insecurity; the outcome of the omnipresent poverty, neglect, bullying, violence, racism, insecurity, guilt, and loss that were synonymous with his childhood. The novel concludes with a metaphorical consideration of death that epitomizes the author’s search for resolution. The last line that reads, “I don’t know how or when/My grieving will end, but I’m always/Relearning how to be human again” (454) underscores the author’s ongoing challenge to move on from his tragic past.