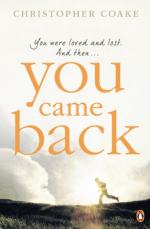 You Came Back Summary & Study Guide

Christopher Coake
This Study Guide consists of approximately 36 pages of chapter summaries, quotes, character analysis, themes, and more - everything you need to sharpen your knowledge of You Came Back.

You Came Back Summary & Study Guide includes comprehensive information and analysis to help you understand the book. This study guide contains the following sections:

This detailed literature summary also contains Quotes and a Free Quiz on You Came Back by Christopher Coake .

The following version of this book was used to create this study guide: Coake, Christopher. You Came Back. New York: Hachette Book Group, 2012. Nook Edition.

Part One is titled “His New Life.” The book begins with the protagonist of the novel, Mark Fife, sensing someone watching him. He was in a café drinking coffee, and his girlfriend Alison was in the bathroom. When Mark looked outside, he noticed a strange woman staring at him. He waved at her and she ran off, and Mark was disturbed. Earlier in the morning, he had woken up from a nightmare about his son, Brendan, who had died seven years ago in an accident. Mark and his girlfriend walked home through the snow together, and Mark decided that he wanted to propose to her. Over the next few days, Mark told his father and friend Lewis about the engagement, and then he went to buy a ring. He had to meet his ex-wife, Chloe, to commemorate Brendan’s birthday and he was not looking forward to telling her about it. A strange woman (who turns out to be the one from the coffee shop) called Mark and left him a confusing voicemail. Mark proposed to Alison and she said yes.

In “Part Two: The Little Boy Who Lived Here,” Mark and Chloe spread the word about their engagement and went out shopping together. Mark had almost died from drinking too much after Brendan had died, and he had quit drinking, but now Mark started drinking again. The strange woman, Connie Pelham, came up to Mark when he was alone and told him that she had purchased his old house, and that her son, Jacob, had seen the ghost of Mark’s son, Brendan. Mark got angry at the woman and left. He went out to dinner with Chloe on Brendan’s birthday and she told him that she had just broken up with her boyfriend. He told her that he was marrying Alison. Chloe got upset and asked him to leave. Mark left like she asked, without telling her about Connie. He spoke to his friend Lewis about the ghost, and Lewis encouraged him to go see for himself, in case Brendan was really a ghost. Connie found Chloe and told her about the ghost, and then Chloe came over to yell at Mark for not telling her right away. Mark decided to cut her off permanently, but he was obsessed with her and the ghost story, and he and Alison started falling apart. One night, Chloe called Mark and told him that she had been to the old house and that Brendan was really there.

In “Part Three: The Mother of His Child,” Mark tried to ignore Chloe’s attempts to contact him, but he finally relented and called her. She told him about her experience in the house, which Connie was letting her stay at, and she asked Mark to meet her the next day and he agreed. Alison went out of town and Mark went to meet Chloe. She apologized to him for blaming him for Brendan’s death and for divorcing him. She asked him to come to the house with her and, although he was a skeptical atheist, he agreed.

In “Part Four: Visitation,” Mark could not wait to go to the house with Chloe, who had gone to see her parents for the night, so he got drunk and snuck over to the old house and broke in. Inside Brendan’s old room, he felt his son’s presence and then he called Chloe and wept.

In “Part Five: The Ghost Killer,” Mark woke up hungover at Chloe’s apartment and the two spent the day together. She asked him to go to Michigan with her to meet a psychic, Trudy, who said she could help Brendan’s soul find rest. Mark agreed, and they left in the morning. Mark was skeptical, but when he met Trudy he felt as if she was trustworthy. Trudy said that she wanted to have a séance in the old house with Mark, Chloe, Connie, and Jacob, but that Mark had to make up with Connie first. Mark agreed and he and Chloe drove back to Columbus had dinner with Connie and Jacob. Mark started to get suspicious because Jacob seemed as if he were lying about seeing the ghost, but when he got back to Chloe’s apartment, they had sex, and he forgot about his worries. Mark avoided Alison for a few days, but then his father called him and made him come home. Alison told Mark that she was pregnant, and Mark’s father told him that the ghost story was a hoax. After Alison and his father left, Mark researched Trudy online and found a bad review about her, but when he brought up his doubts to Chloe she told him not to worry about them and asked him if he wanted to buy the old house back and live in it again and then they had sex again. Later that day, they went to the séance and Mark became convinced that Jacob was lying. The boy finally admitted it, just before the ceremony was about to start. Chloe wanted to go through with it, but Mark refused and told the psychic to leave. Chloe was devastated and so tried to kill herself in Brendan’s old room with valium. When Mark found her, she offered him the rest of the pills, but he did not take them. Instead, he took her to the hospital, and the doctors saved her in time. But then they told Mark that she did not want to speak to him.

In “Part Six: His New Life,” Mark went to live with his father for a few months and then moved back to Columbus to try to make amends with Alison and be a father to his upcoming daughter. Alison still had not forgiven him, but they were moving to Denver together. Before they left, Mark went to the old house to say goodbye to it, but he found Jacob outside riding his bike. Jacob told Mark that Chloe was buying the house and seemed happy about it. Mark saw a movement in Brendan’s old room and drove off, imagining what he would tell his daughter about his son.

More summaries and resources for teaching or studying You Came Back.

You Came Back from BookRags. (c)2022 BookRags, Inc. All rights reserved.