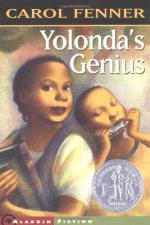 Carol Fenner
This Study Guide consists of approximately 29 pages of chapter summaries, quotes, character analysis, themes, and more - everything you need to sharpen your knowledge of Yolonda's Genius.

This detailed literature summary also contains Topics for Discussion and a Free Quiz on Yolonda's Genius by Carol Fenner.

"Yolanda's Genius" is the story of eleven-year-old Yolanda's fierce determination to prove that her younger brother, Andrew, is a musical genius.

"Yolanda's Genius" opens with the Blues family - Momma, Yolanda, and Andrew - eating breakfast in the slums of Chicago. Because of the drugs present in the neighborhood, and the fact that seven-year-old Andrew has come home with a pocket full of cocaine, Momma decides to move her family to Grand River, Michigan, a white neighborhood where she hopes there is less crime and more opportunity for her children. Yolanda and Andrew's father, a police officer, died when Yolanda was only four-years-old. The only thing he left behind was his Marine Band harmonica, which he passed on to Andrew. Yolanda is extremely uncomfortable in her new school, and often imagines herself back in Chicago, skipping rope, flirting with her crush, Tyrone.

In Grand River, Yolanda doesn't have any friends and she's often teased about her size. The only kid who tries to befriend Yolanda is a strange little girl with whirling eyes named Shirley, whom Yolanda nicknames "Whirly Shirley". Yolanda has many apprehensions about befriending Shirley, such as the fact that she's white, but Yolanda also embraces the opportunity to reinvent herself. She tells Shirley that she is a world class double-dutch roper. Shirley is impressed with all Yolanda's stories and begs Yolanda to teach her how to jump rope. Aside from avoiding Shirley's persistent requests to become best friends, Yolanda's time is also spent protecting her brother, Andrew, from the few drug pushers in the park.

The climax of the novel happens when the drug pushers attack Andrew for playing his harmonica too close to their grounds. They fear that his beautiful music will turn kids away from drugs and then they'll be out of business. They beat Andrew up and smash his daddy's harmonica. Andrew is not the same after the attack, and Yolanda realizes that her brother is nothing without his music. She is sure he is a genius, but she must convince the rest of the family that he is, too. Breaking all her mother's rules, Yolanda manages to purchase a matching Marine Band harmonica for her brother, and to convince the shop owner that Andrew is a musical prodigy. But convincing a shop owner isn't enough for Yolanda. She knows that if she really wants to protect Andrew she must ensure he is place in a school for the gifted, away from the dangers of the streets. While visiting her Aunt Tiny in Chicago, Yolanda devises a plan to sneak Andrew onstage during a Blues concert in the park. When the real musicians hear Andrew's talent, they take him onstage and the rest of the world finally meets Yolanda's genius.