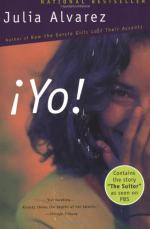 Get Yo! from Amazon.com
View the Study Pack
View the Lesson Plans
Study Guide
Order our Yo! Study Guide

Plot Summary
+Chapters Summary and Analysis
The sisters - The maid's daughter
The teacher - The caretakers
The best friend - The student
The suitor - The night watchman
The third husband - The father
Free Quiz
Characters
Symbols and Symbolism
Settings
Themes and Motifs
Styles
Quotes
Order our Yo! Study Guide

Julia Álvarez
This Study Guide consists of approximately 53 pages of chapter summaries, quotes, character analysis, themes, and more - everything you need to sharpen your knowledge of Yo!.

Yo! Summary & Study Guide includes comprehensive information and analysis to help you understand the book. This study guide contains the following sections:

This detailed literature summary also contains Quotes and a Free Quiz on Yo! by Julia Álvarez.

The following version of this book was used to create this study guide: Alvarez, Julia. Yo!. New York: Plume, 1997.

Yo! is a novel told through alternating points-of-view by a cast of characters who know or are related to a central protagonist, Yo Garcia. In the first two chapters, Yo's sisters discuss their alienation from Yo after she has published a book that is a fictionalized account of their lives. Yo's sister Sandi refuses to speak to Yo for months, but decides to forgive her after she gives birth to her first child, which bears a resemblance to Yo. Next, the Garcia sisters' mother Laura reflects on the difficulties the family faced when they first moved from the Dominican Republic to the United States. They fled to escape the murderous regime of dictator Rafael Trujillo.

Next, Yo's cousin Lucinda and the Garcia family's maid's daughter Sarita weigh in. Lucinda recalls attending boarding school with Yo in the U.S., and quarreling with her over a boy. Lucinda ended up dating the boy, but after graduation, when she was preparing for college, her parents suddenly demanded she return to the D.R. Lucinda found out that Laura had read about Lucinda and her boyfriend in Yo's journal and told Lucinda's parents. Lucinda blames Yo for altering the course of her life. Sarita recalls moving to the U.S. to live with her mother in the Garcias' basement, and becoming the subject of a report Yo was writing for college. Out of frustration with being under scrutiny, she stole the report, but later returned it. Sarita notes that her mother told her she was the illegitimate daughter of one of the Garcia girls' uncles on their mother's side, a wealthy member of the de la Torre family in the D.R.

A chapter titled “The teacher” (73) provides the perspective of Yo's college professor, Jordan Garfield. Professor Garfield recalls writing Yo numerous graduate school recommendation letters over the years, as Yo could never commit to a program of study. He also narrates a story from his personal life, recalling his divorce from his wife and subsequent relationship with a male fellow-teacher named Tim Matthews. When Matthews died of AIDS, Garfield decided he should stop writing letters for Yo, and instead encourage her to pursue her writing career. In the next chapter, “The stranger” (97), Yo is visiting the D.R. and she helps an elderly woman write a letter of advice to her daughter in the U.S. who is trapped in an abusive marriage. The next chapter also takes place in the D.R., and depicts Yo helping the caretakers of the house in which she is staying move past the recent death of their son.

Yo's friend Tammy Rosen recalls living with Yo in Boston during a time when they were both have intimacy issues with men. Both women were writers and frequently read their work to one another, and Tammy encouraged Yo to also share her writing with the man in her life. This chapter intersects with the next, “The landlady” (152), in which Tammy helps Yo move to New Hampshire for her new job teaching at a local college. Yo's new landlady, Marie Beaudry, is in an abusive relationship with her husband, and Yo insists that she end it. After some soul-searching, Marie agrees to kick her husband out, and Yo helps her move his things out onto the lawn.

Next, the novel shifts to the perspective of Lou Castellucci, one of Yo's former students, who discovers after buying one of Yo's books that she plagiarized a short story he wrote for her class. He considers telling the head of the English department of the college, but decides not to because Yo was kind to him and encouraged his writing efforts.

“The suitor” (187) presents the point-of-view of Dexter Hays, one of Yo's boyfriends who traveled with her to the D.R. only to realize that their cultural differences precluded a more serious long-term relationship. This is followed by “The wedding guests” (213), in which several characters, including Lucinda, Sarita, and Tammy, narrate the events of Yo's wedding to her third husband, Doug Manley. The novel then returns to the D.R. where Yo is visiting alone after her wedding. A farmer named José asks Yo if she will hire him as a night watchman, and she agrees to this arrangement. He is taken aback by her kindness, as she even gives him reading lessons before returning to the U.S.

This is followed by “The third husband” (258), a chapter told from the point-of-view of Yo's new husband Doug. Yo has just returned from the D.R. and Doug's teenage daughter Corey is visiting. Corey is not fond of her stepmother, and the situation is tense until Corey mentions she received a phone call at the house from José, who asked her to marry him and bring him to the U.S. Yo and Corey conspire together on ways to improve José's situation, and build a bond with each other through this project.

The novel then shifts to the disturbing perspective of a man who has been stalking Yo for 25 years. He discovers that Yo is giving a book reading near his home in Chicago and manages to find her hotel, where he holds her at knife point in her room. The chapter ends with no clear resolution.

In the final chapter, Yo's father Carlos reflects on an incident from Yo's childhood in the D.R. She had been snooping through Carlos' things and come across his gun, which was contraband under Trujillo's regime. She told the Garcias' neighbor, a general in Trujillo's army, that her father had a gun and was going to “kill all the bad people” (305). Carlos punished Yo with a beating for telling this story, as she could have gotten the family in serious trouble, but in the present, he looks back on this moment with regret, feeling as though he let his daughter down. In order to make amends, he reassures Yo that her life's work, writing, is very meaningful.

More summaries and resources for teaching or studying Yo!.