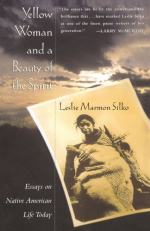 First published in 1974 in Kenneth Rosen's anthology, The Man to Send Rain Clouds: Contemporary Stories By American Indians, "Yellow Woman" has subsequently appeared in Leslie Marmon Silko's 1981 work, Storyteller, a collection of poems, stories and photographs. "Yellow Woman" tells the story of a young Laguna Pueblo woman who temporarily goes off with a strange man she meets on a walk along the river. The woman is swept up in the traditional Keresan myth of Kochininako, the Yellow Woman, who left her tribe and family to wander for years with the powerful ka'tsina, or spirit, Whirlwind Man. The story features a compelling blurring of the boundaries between myth and everyday experience, between contemporary Native American life and ancient myths.

In Kenneth Rosen's anthology, The Man to Send Rain Clouds, "Yellow Woman" was published to stand alone. In Storyteller, Silko surrounds "Yellow Women" with additional poems and stories that further elucidate Yellow Woman's relationship to the land, the spirits that pervade it and the stories that derive from it. Bernard Hirsch writes in American Indian Quarterly that "this multigeneric work lovingly maps the fertile storytelling ground from which her art evolves and to which it is here returned— and offering to the oral tradition which nurtured it." In conjunction with the other works included in Storyteller, "Yellow Woman" manages to both recreate and comment upon the oral traditions that have sustained the Laguna Pueblo community.