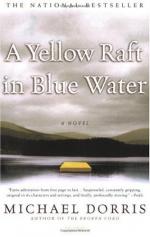 Introduction & Overview of A Yellow Raft in Blue Water

This detailed literature summary also contains Bibliography and a Free Quiz on A Yellow Raft in Blue Water by Michael Dorris.

Published in 1987, A Yellow Raft in Blue Water was Michael Dorris's first novel. Though the author went on to write six other works of fiction (including three young adult novels and a book of short stories) his first novel is generally considered his finest. A Yellow Raft in Blue Water is especially admired for his layered technique of telling the same story from multiple points of view. According to critic Louis Owens, Dorris borrowed that method from his wife, Louise Erdrich, a fellow writer and Native American who uses it in both Love Medicine and The Beet Queen. Dorris's novel, however, says Owens, "generates an impact sharper and stronger than either of [Erdrich's]." Although reviewers like Michiko Kakutani criticized Dorris for withholding key information from the plot in order to create a "false suspense," the critics' consensus is that what keeps readers involved is the vividly drawn characters rather than any formulaic mystery novel devices. A particular strength in the book is Dorris's portrayal of Indians who are neither stereotyped traditionalists nor mouthpieces for Red Power, but rather human beings in many ways like everyone else, trying to find their places in the world. As such they exemplify not just the clash between different cultures, but some of the great themes of fiction, whether it be the search for identity, the struggle within the self between strengths and weaknesses of character, or the clash of different cultures.