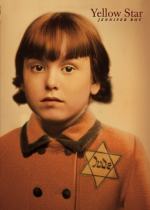 Jennifer Roy
This Study Guide consists of approximately 30 pages of chapter summaries, quotes, character analysis, themes, and more - everything you need to sharpen your knowledge of Yellow Star.

The following version of this book was used to create the guide: Roy, Jennifer. Yellow Star. Two Lions, 2012.

Yellow Star by Jennifer Roy is the true story of Syvia Perlmutter, one of twelve children to survive the Lodz ghetto in Poland during World War II. Syvia is four and a half when the Germans invade Poland and her parents, Isaac and Haya, her sister, Dora, and extended members of her family are forced to relocate. Syvia is confused by what is happening, but makes new friends in the ghetto.

Syvia and her friends play with dolls and talk about the rumors of what they have heard about happening in the ghetto. The living conditions are miserable and people, including children, are vanishing. Syvia does not know what happens to her friends when they go missing, but she seems to understand that they will not return.

Conditions worsen in the winter and eventually the people in the ghetto risk starvation. The family struggles to eat through the winter but they are able to grow some vegetables in the summer. Syvia’s father Isaac works hauling flour sacks to the bakery. Haya and Dora work in a garment factory, leaving Syvia to clean inside in the small apartment.

The war rages on and it appears that no one will be able to defeat the Nazis. The Nazis begin to take people from the ghetto to the concentration camps via train. At first, the Nazis reassure the Jews that the children will be better cared for, but the adults begin to hear rumors.

The Nazis stage nighttime raids to collect all of the children in the ghetto to send them to the concentration camps. Syvia’s family learns about the raids and Isaac develops a plan to help protect Syvia. When the soldiers come, Isaac and Syvia flee and spend the night in a cemetery for a few nights until the soldiers have moved on. Other families do the same in order to save their children. The nightly raids cease when the Nazis believe they have captured all of the children. The remaining children, including Syvia must stay indoors and out of sight at all times.

As the population of the ghetto dwindles, people, including Syvia’s family, are tasked with cleaning up the ghetto. When a cellar is found, the remaining children are hidden away. The children help the adults haul coal to the kitchen. The Nazis discover the cellar and pull the children out. Syvia is beaten by one of the soldiers and the adults form a circle around them. The Nazi lets Syvia go and the children are no longer forced to hide.

As the war progresses, the people in the Lodz ghetto begin to hear bombings in the distance. The Nazis lock people in the building so that they cannot escape the bombing. A man has a key and allows everyone to escape. The group hides in a building across from the Nazi barracks, thinking that it will be the last place the Nazis look for them.

One night, Syvia hears the bombing in the distance and sees Nazis fleeing on motorcycles. She wakes up her family and the group is able to escape the building. While the group is in a courtyard, the bombing ceases. A Russian soldier later tells them that he saw the reflection of the Stars of David on their coats and halted the bombing to aid in their rescue. Syvia and her family are liberated.

More summaries and resources for teaching or studying Yellow Star.