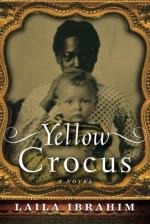 Laila Ibrahim
This Study Guide consists of approximately 40 pages of chapter summaries, quotes, character analysis, themes, and more - everything you need to sharpen your knowledge of Yellow Crocus.

Yellow Crocus, written by Laila Ibrahim, is set in the mid-1800’s American South. It is the story of the long-lasting relationship between a privileged white heiress Elizabeth Wainwright and a black woman named Mattie. Upon Elizabeth's birth, Mattie becomes her wet-nurse and, over time, her mammy and confidante.

The story begins as Mattie, who has recently become a mother, is brought in from the fields to nurse the newly born Elizabeth, whose mother Ann is repulsed by the thought and practice of nursing Elizabeth herself. Mattie is at first angry about being forced to leave her son Samuel down in the slave quarters, but she soon adjusts to her new life, becoming more affectionate with Elizabeth (whom Mattie calls Lisbeth) as time passes.

Over the years of her childhood, and despite the efforts of her strict, conservative mother and grandmother, Lisbeth’s relationship with Mattie deepens. It reaches the point where she prefers Mattie’s company to that of her flesh-and-blood family. These good times continue until Mattie gets pregnant as the result of a visit from her husband Emmanuel. She is sent back to the slave quarters. At first, Lisbeth misses Mattie fiercely. Then, she becomes absorbed into her mother’s goals of a good marriage for her.

The birth of Mattie’s second child re-awakens a long dormant need in both Mattie and Emmanuel. It is their need to escape their current circumstances and journey north into a better, freer life. When Emmanuel and Samuel run away, Mattie is suspected of being involved. She is beaten for information. She reveals nothing and resumes her duties, the whole time her mind preoccupied with thoughts and plans of escape. Lisbeth, meanwhile, is becoming more concerned with the preoccupations of the girls of her position – dances, dresses, and boys. Her mother repeatedly maneuvers her into encounters with Edward Cunningham, the son of the richest plantation owner in the area. However, Lisbeth finds herself more attracted to Matthew Johnson, the much poorer but much nicer son of another family.

Eventually, Mattie manages to escape with her baby. She leaves Lisbeth a memento that Lisbeth finds particularly valuable when, several years after Mattie leaves, she (Lisbeth) discovers Edward, whom she is engaged to marry, sexually assaulting one of the slaves. This makes Lisbeth realize how much she hates everything about the life she was born into and is about to marry into. So, she breaks off her engagement and marries Matthew. The couple moves North.

A year or so later, when Lisbeth is having trouble giving birth to her first child, a neighbor calls in the local midwife, who turns out to be Mattie. Mattie recognizes Lisbeth without Lisbeth recognizing her. The baby is born, and a week or so later, when about to offer payment, Lisbeth realizes Mattie's identity. After a moment of indecision, Lisbeth acts on the hope that Mattie will be glad to see her, knocking on her front door. Mattie welcomes Lisbeth into her home. The connection remained, though they were not as close as they were many years before.

More summaries and resources for teaching or studying Yellow Crocus.