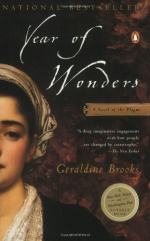 Plot Summary
+Chapters Summary and Analysis
Apple Picking Season
Ring of Roses
The Thunder of His Voice
Rat-fall
Sign of a Witch
Venom in the Blood
Wide Green Prison
So Soon to be Dust
The Poppies of Lethe
Among Those That Go Down to the Pit
The Body of the Mine
The Press of Their Ghosts
A Great Burning
Deliverance
Apple Picking Time
Epilogue - The Waves, Like Ridges of Plow'd Land
Free Quiz
Characters
Objects/Places
Themes
Style
Quotes
Topics for Discussion
Order our Year of Wonders Study Guide

Related Topics
The Secret Chord
People of the Book
Horse: A Novel

Geraldine Brooks
This Study Guide consists of approximately 41 pages of chapter summaries, quotes, character analysis, themes, and more - everything you need to sharpen your knowledge of Year of Wonders.

This detailed literature summary also contains Topics for Discussion and a Free Quiz on Year of Wonders by Geraldine Brooks.

Year of Wonders: A Novel of the Plague is a fictional portrayal of actual events that occurred in the small English village of Eyam in 1666. When a plague strikes the village, residents make the extraordinary choice, led by a young priest, to quarantine themselves to prevent further spread of the disease. The story is told through the eyes of a young maid, Anna Frith, as she witnesses the disintegration of her small community as death takes its toll on every family, including her own.

Before the plague starts, Anna is a young widow with two small boys. Her husband, Sam, had died in a mining accident. Anna works as a maid at the rectory and occasionally at the local estate, Bradford Hall. The plague begins when she takes in a lodger, who has cloth imported from London for his tailoring. He dies soon after the bolts of cloth arrive, and his death is quickly followed by those of Anna's sons and neighbors. Soon, many in the village are sick. Recognizing this as a plague, the pastor, Michael Mompellion, asks the villagers to take an oath agreeing to quarantine the town to prevent the spread of the disease. Michael and his wife, Elinor, spend most of their time tending to the sick and praying with the dying. Anna often accompanies them.

Some villagers turn to superstition and blame the plague on Mem and Anys Gowdie, midwives and herb specialists. The women are brutally murdered by a mob. Anna had always admired these women, and soon she and Elinor begin studying their herbs and medical books to aid the sick and strengthen the healthy. Anna gets closer to Elinor, who she views as a friend, teacher and mother-figure. At times, Anna feels jealousy about the love that exists between Elinor and Michael as she is so lonely with all her loved ones dead. She tries using opium to numb her pain but decides against continuing the drug after Elinor shares her history and addiction to poppies. Elinor shares how she ran off with a young man who abandoned her. Pregnant and afraid, she used a hot poker to destroy the unborn child but also destroyed her womb and so can't have children. Michael worked on her father's estate and becomes her friend, then husband.

Superstitions continue to escalate as many claim they have seen Anys' ghost and pay her to instruct them how to prevent sickness. Anna's stepmother, Aphra, is highly superstitious and, like Anna's father Joss, expresses contempt toward the Mompellions. By summer, half the village is buried. Anna asks her father to help dig the graves as the sexton has died, and Michael Mompellion is exhausted from adding this to all his other duties. Joss finally agrees but begins demanding high payments for his services, making him a despised man in town. He eventually attempts murder to rob a man, but the man survives. Joss' hands are nailed to the man's mine stowes. His wife doesn't come for him in the night as expected as her sons have come down with the plague, so he dies in a storm.

The villagers meet at an outdoor area instead of church so they can stand farther apart and not spread the disease as it thrives on warm weather. One villager turns to flagellation, which greatly upsets Mompellion. The man has rid his house of all goods except handcrafted crosses. The man finally dies in an accident, and his wife is given furnishings and clothes, but she dies soon after from the plague. Mompellion recognizes that the plague was passed onto the woman through the gifts she received. He instructs the villagers to burn all their goods to prevent more spread.

Meanwhile, Aphra has been discovered to be the phony ghost of Anys Gowdie, who has been taking money from the villagers in exchange of useless cures. Two men take charge of her for the night before her trial the next day. They put her in pig slop up to her neck, which she barely survives. The experience removes any shreds of reason Aphra had left and she goes insane. Anna is concerned for her little daughter, Faith, and tries to visit Aphra. She discovers Faith has also died, and her mother has the corpse hanging on a wall as she rants around a fire. Everyone decides it is best to leave Aphra alone until her fit is over.

It has become apparent that the plague is over as there have not been any new deaths for weeks. Elinor implores her husband to reopen the village. A date is finally set and all the villagers gather to hear the official news. But before it can be shared, Aphra appears with the corpse of her daughter. Elinor and Michael try to comfort her, but she kills Elinor before taking her own life.

Mompellion is inconsolable following Elinor's death, much as Anna tries to pull him from his depression. One day, Anna takes his horse and gallops through a neighboring village. She feels suddenly alive and wants to choose life over death. When she returns, Michael greets her and before long, they embrace and kiss. They go into the rectory and make love in the kitchen. Later, Michael goes to her cottage and they spend a tender evening and night together. In the morning, Anna discovers a shocking truth - Michael had never touched his wife as a punishment for her lustful sin and killing her unborn child. Now that he has lost his faith, he plans to do what he pleases because it was all meaningless. Anna is repulsed by his cruelty to Elinor and runs away. She finds refuge in the church but encounters Elizabeth, the Bradford's haughty daughter. She tells Anna her mother is dying in childbirth. Anna agrees to try to help her.

Anna discovers that Mrs. Bradford's pregnancy is illegitimate. She manages to save the mother and baby girl but soon discovers Elizabeth trying to drown the infant. Anna says she will take the baby away and is given some money in exchange. The next morning Mompellion warns her that Ms. Bradford is on his way and that Anna is in danger. He gives her his horse and a letter of introduction to stay with Elinor's father. Anna decides on a different course and takes a boat bound for Venice. She decides to stop in the Arabic port city of Oran. She marries a doctor in name only to be able to stay in his home as part of his harem. She becomes his assistant and learns many new ways of approaching health and medicine. She also has a baby by Michael Mompellion that she names Elinor. The novel ends with Anna and her two daughters venturing out in to the city. Anna has found independence, work she is passionate about and renewed motherhood.

More summaries and resources for teaching or studying Year of Wonders.