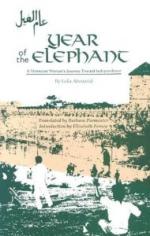 Year of the Elephant: A Moroccan Woman's Journey Toward Independence, and Other Stories - A House in the Woods, and A Vacation Summary & Analysis

Layla Abu Zayd
This Study Guide consists of approximately 23 pages of chapter summaries, quotes, character analysis, themes, and more - everything you need to sharpen your knowledge of Year of the Elephant.

A House in the Woods, and A Vacation Summary and Analysis

A House in the Woods: The setting is a small village. Three young girls, sisters, played near a stream. The eldest declared that they would build a house. The girls brought pebbles from the stream to the build site. The two younger sisters waded into the stream and used their dresses to carry many pebbles.

An old man saw the sisters struggling with pebbles, so he lent them an orange sack. He then settled down under a tree for a nap, pleased by the babble of the brook and the sounds of the girls' voices.

The girls completed their house, and then the eldest declared they would gather flowers to make it pretty. While gathering flowers, one sister had fun as she chased a hornet among the...

(read more from the A House in the Woods, and A Vacation Summary)

More summaries and resources for teaching or studying Year of the Elephant: A Moroccan Woman's Journey Toward Independence, and Other Stories.

Year of the Elephant: A Moroccan Woman's Journey Toward Independence, and Other Stories from BookRags. (c)2022 BookRags, Inc. All rights reserved.