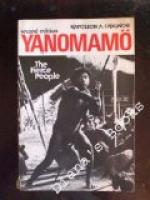 Napoleon Chagnon
This Study Guide consists of approximately 29 pages of chapter summaries, quotes, character analysis, themes, and more - everything you need to sharpen your knowledge of Yanomamo.

This detailed literature summary also contains Topics for Discussion and a Free Quiz on Yanomamo: The Fierce People by Napoleon Chagnon.

Superstitions play a major role in the daily lives of the Yanomamo people. Infant mortality rates are high and it is generally accepted that all unexplained deaths are the result of evil spirits. More specifically, it is often believed that someone sends those evil spirits. To achieve revenge, tribe members send out evil spirits of their own.

Napolean A. Chagnon is an anthropologist who spends several years during multiple visits to the Yanomamo people of Brazil and Venezuela, then relates his findings in the form of this monograph. Chagnon reveals many aspects of the Yanomamo tribes, including details about two men who were important to his research. Kaobawa is headman of a Bisaasi-teri tribe of the Yanomamo people. He is a quiet, unassuming man who leads largely by example. When he needs his people to clear the weeds from a central area in preparation of a feast, he begins the task and is soon joined by others who do most of the work.

The other man who plays an important role in Chagnon's research is Rerebawa. Chagnon says that he considers the man his friend and that they make many trips together. On one of those, Chagnon takes Rerebawa on a trip to civilization.

The Yanomamo prize ferocity among the men. The young boys are taught to be fierce and are rewarded when they strike out at others, even adults. Young girls are considered an asset only in that they are able to take on many duties and do so at an early age. Girls have little say in their lives, are handed off in marriages that are beneficial to their fathers, brothers or male relatives, and are largely at the mercy of husbands. When their husbands are cruel, male relatives may sometimes rescue the woman, usually giving her in marriage to some other man. Because of this potential for rescue from a bad situation, women hate the thought of being taken captive or traded to some other village. Trading of women is fairly common as is being captured. When a village is being raided, women tend to take their young children with them whenever they leave the relative safety of the compound so if they are captured they will not be separated from their children.

Warfare, in various forms, is very common. From a duel known as chest pounding to outright raids, Chagnon says most people have lost a sibling, child or parent to warfare. The chest duel is a formal method Yanomamo use to avoid full-fledged war. In this, two men meet, one extending his chest and the other striking with his fist. The roles are then reversed.

Chagnon says he sees many changes occur among the Yanomamo people over the course of his research. The people obtain many possessions and that prompts many to stop living among the large tribal communities so that they have the ability to collect and retain those possessions. Many move nearer established missions to collect the benefits—including the fact that shotguns are sometimes provided as payment for work. There are also diseases introduced to which the Yanomamo have no natural resistance and which prove fatal.

More summaries and resources for teaching or studying Yanomamo: The Fierce People.