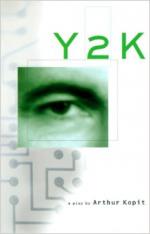 Joseph and Joanne have drinks as they talk about how bad their days have been. Conversation reveals that someone named Emma called from Paris to say she's had an obscene phone call from a man who sounded just like Joseph and also that Joseph's lawyer never called back.

Astrakhan interjects a short speech in which he talks about how he became interested in, and involved with, computer hacking (breaking into secure files and manipulating information). Anyone can do what he does. All they need is the courage.

Conversation between Joseph and Joanne resumes, with Joseph talking about how angry he is about the interrogation. A well-known author was in the office of the publishing house and found Joseph's story amusing, and Joseph is sure he's not in trouble. Joanne then talks about her bad day, starting with the news that she talked with...