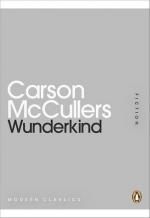 She's Come Undone (1992), a novel by Wally Lamb, is a darkly humorous account of a woman forced to deal with the lifelong effects of growing up in a dysfunctional family.

"Paul's Case" (1905), a short story by Willa Cather, deals with a young man who, much like Frances in "Wunderkind," longs to escape what he considers to be a "common" life.

Perhaps McCullers's most famous work, The Heart is a Lonely Hunter (1940) tells the story of a young girl who learns the meaning of loneliness through her association with a group of social outcasts.

Jamaica Kincaid's "Girl," from her collection At the Bottom of the River (1983), is a young woman's recollection of her mother's instructions to...