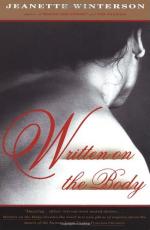 Jeanette Winterson
This Study Guide consists of approximately 22 pages of chapter summaries, quotes, character analysis, themes, and more - everything you need to sharpen your knowledge of Written on the Body.

Written on the Body Summary & Study Guide includes comprehensive information and analysis to help you understand the book. This study guide contains the following sections:

This detailed literature summary also contains Topics for Discussion and a Free Quiz on Written on the Body by Jeanette Winterson.

Written on the Body by Jeanette Winterson is an erotic tale of love. The novel is about an unnamed narrator who is grieving the loss of love. The narrator, after a long string of fatal love affairs, finally found a soul mate in Louise. However, the narrator came to a point in their relationship where a choice between happiness and Louise's life had to be made. The narrator made the choice alone and comes to regret it. Written on the Body is a story of love with all the stereotypes removed, leaving in its place the purity of love between human beings, not gender or sexuality.

The narrator and Louise become lovers. The narrator tells Jacqueline right away, allowing her the dignity of walking away before the lies become too much to overcome. Jacqueline takes the news with outrage, destroying the apartment she shared with the narrator in an attempt to injure in response to her own pain. The narrator is not bothered by Jacqueline's anger and instead focuses on Louise. Louise tells her husband about their affair, also reluctant to live with lies. For a time Louise and the narrator carry on their relationship in her husband's house. However, Elgin eventually has enough of their relationship. Louise decides to file for divorce.

The narrator and Louise move in together. For several months they share a blissful relationship. However, Elgin comes to the narrator to tell of Louise's battle with leukemia. The narrator is shocked and insists that Louise tell all. Louise swears that the illness is minor and that she is not having symptoms. Louise's doctors are doing tests, but are sure that she does not need treatment while she is without symptoms. The narrator goes to Elgin and is told that Louise needs to have treatment at his research labs in Switzerland. Elgin promises that if the narrator will walk away, Louise will come back and consent to the treatment. The narrator agrees.

More summaries and resources for teaching or studying Written on the Body.

Written on the Body from BookRags. (c)2022 BookRags, Inc. All rights reserved.