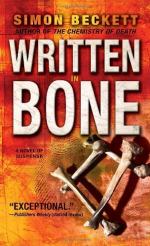 This detailed literature summary also contains Topics for Discussion on Written in Bone by Simon Beckett.

"Written in Bone" is a mystery novel by Simon Beckett, one in a series that features the forensic anthropologist David Hunter. An incinerated body has been found on the remote Scottish island of Runa, and Hunter is called in to examine it. As the investigation unfolds, two different murderers surface and the body count rises. After a series of unexpected twists, the criminal mastermind is revealed to be the retired cop Andrew Brody. Meanwhile, the beautiful Grace Strachan turns out to be a twisted serial killer in her own right.

After Brody 'finds' a burned body in an abandoned rural cottage, he joins Hunter and two local policemen in investigating its origins. Their first task is to determine whether the strange death was an accident or not. The island's few citizens are insular and resistant to any outsiders other than the rich and philanthropic Michael Strachan and his wife Grace, two South Africans who have rebuilt the infrastructure of the island. Hunter develops a friendship with the friendly innkeeper Ellen McLeod. After several sessions of advanced forensic analysis, Hunter is eventually

able to determine that the body belongs to a mainland prostitute named Janice Donaldson who was killed with a blow to the head before she was burned. After sharing certain secrets with the young cop Duncan, Brody gets nervous and decides to destroy all of the evidence, burning down several buildings and killing the young cop Duncan.

Aided by a crippling storm, Runa descends into chaos. Grace Strachan, herself a serial killer, resumes her insanity and murders the young reporter Maggie Cassidy. Using Maggie's dictaphone, the police determine that she was planning to meet Michael Strachan at the time of her death. The police confront Michael at his solitary retreat: the ancient burial Cairns. Michael first confesses, but then admits that he has lied to protect his wife. Furthermore, he reveals that his wife is actually his sister and that they have had an incestuous coupling since they were teenagers.

Meanwhile, following an accidental slip-up by Brody, Grace has found out about Michael's affair with the Innkeeper Ellen McLeod and has begun a murderous rampage. The police stop Grace from killing Ellen, but Michael kills himself and presumably his wife by blowing up the hotel. Hunter is about to leave when he realizes that Brody has been behind the first murders. Brody admits to his crimes, explaining that he wished to avenge his daughter's murder for which he blamed, wrongly, Michael Strahan. Brody then commits suicide. Back in London, Hunter is relaxing when he is unexpectedly attacked and possibly killed by the not-dead Grace Strachan. The book ends with Hunter possibly dying on his front step.