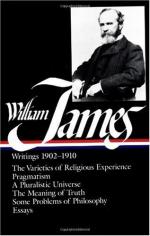 This detailed literature summary also contains Topics for Discussion and a Free Quiz on Writings, 1902-1910 by William James.

Writings 1902-1910 is a collection of William James writings on psychology, religion, philosophy, science, and social critique. In particular, James defends his theory of pragmatism with extraordinary academic rigor, using concepts and principles from several different fields to support his conclusions.

The book begins with one of James' most influential writings "The Varieties of Religious Experience." James begins by attacking the idea that current practice of religion is simply an atavistic response to an attempt of our ancestors to explain natural phenomena before the advent of science. He asserts that religious experience is real and serves to connect people to a 'spiritual universe'. Finally he claims that religious experiences impact people in a positive fashion, making them better members of the world society.

James next outlines his theory of pragmatism. The pragmatic theory is a way of approaching philosophy and indeed general life in which the difference of the outcome is used to measure the validity of the argument. James is thus able to argue for the existence and importance of internal experience (some of which being religious) by virtue of the fact that it impacts people's behavior, experience, and beliefs. The pragmatic approach thus allows theories to become 'instruments' instead of answers to difficult problems.

The thesis is continued by focusing on the debate between pluralistic and monistic views of the universe. The monists focus on deductive reasoning which moves from wholes to parts, and the pluralists focus on inductive reasoning moving from parts to wholes. James explores the philosophy of Hegel as well as Fechner, both monists. He then explores the philosophy of Bergen who argues that 'mere conceptual logic' can not tell us what is possible. James argues for the pluralistic view with particular focus on the importance of subjective experience.

The next section of his writings has to do with how truth is determined. James holds that from a pragmatic view, truth must include the experience of the subject and the practical consequences for that subject. He goes on to state that understanding of the truth necessarily includes a treatment of the process by which that truth was arrived at. James then answers critiques by several theoreticians, in particular claims that pragmatism is a renewal of positivist theory.

James then outlines some of the major pitfalls being encountered in philosophy. In particular, James focuses on the difference between concepts and percepts and how they are both used to create meaning. James asserts that percepts are of a higher order because they are immediate and related to the flow of experience. He also explores novelty, the finite, and the infinite through conceptual and perceptual lenses.

Finally James concludes with various essays on such topics as higher education, philosophy, truth, humanism, and consciousness. He offers social critique on trends occurring within higher education including exclusivity and preference for doctoral degrees. In addition, he writes about social issues including war and conquest. James also tackles the idea of the existence of consciousness as well as continued writing on earlier topics.