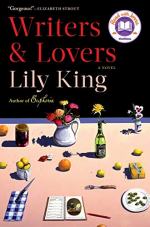 Lily King
This Study Guide consists of approximately 39 pages of chapter summaries, quotes, character analysis, themes, and more - everything you need to sharpen your knowledge of Writers & Lovers.

In Pages 128 - 200, Casey and Oscar meet at the arboretum. Their conversation happens easily. When Oscar learns Casey is a writer, he feigns disappointment, saying he does not date writers. Casey only dates writers. It becomes a joke. They kiss.

At home, Casey has a message from Silas saying he is back in town and wants to see her. She deletes it.

Casey goes to a follow-up gynecological appointment. Afterwards, she sees Muriel. They talk about writing. Muriel asks to see Casey's novel. Casey is nervous; Muriel is a successful writer and harsh critic. She agrees to give her a draft next week. She tells Muriel about her date with Oscar, which thrills Muriel.

Casey and Oscar have a second date. At work, while telling Harry about the date, Silas shows up. Though Casey has been ignoring his calls, she speaks to him...

More summaries and resources for teaching or studying Writers & Lovers.