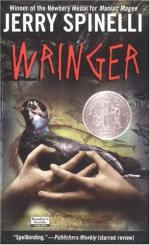 Jerry Spinelli
This Study Guide consists of approximately 52 pages of chapter summaries, quotes, character analysis, themes, and more - everything you need to sharpen your knowledge of Wringer.

Instinctively, Palmer knows that Nipper is in one of the crates waiting to be set free only to be shot out of the sky. Palmer even imagines how Nipper will feel when he is unexpectedly shot when he is just trying to fly. Palmer imagines that Nipper will see Palmer's face in the crowd and that the bird will be killed while trying to limp toward Palmer.

Before long, Palmer's worst fear comes true as he watches a pigeon that looks like Nipper being released from the white box. Amazingly though, the shooter misses and the pigeon soars toward the trees only to circle back. Palmer covers his face with his hands so he will not serve as a lure, inviting Nipper back toward the field where the shooter will surely kill him.

Palmer steps onto the killing field and waits for the...

(read more from the Chapter 40 Summary)