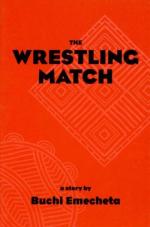 Buchi Emecheta
This Study Guide consists of approximately 42 pages of chapter summaries, quotes, character analysis, themes, and more - everything you need to sharpen your knowledge of The Wrestling Match.

1970: The Nigerian Civil War ends, leaving a total of over 1 million people dead from war, starvation, and disease.

Today: In 1999 and 2000, under the rule of President Olusegon Obasanjo (elected in 1999), rival religious and tribal groups continue centuries- old conflicts with violent rioting; in one riot, over 300 people are killed in hand-to-hand fighting. Shortages of food and fuel, as well as power blackouts, exacerbate the situation, and the country teeters on the brink of another civil war.

1970: Nigeria experiences one of the world's worst famines in the wake of the Civil War.

Today: The country of Nigeria remains today in the condition of massive debt, poverty, and inflation into which it plunged in the 1980s, following a period of unprecedented...

More summaries and resources for teaching or studying The Wrestling Match.

The Wrestling Match from Gale. ©2005-2006 Thomson Gale, a part of the Thomson Corporation. All rights reserved.