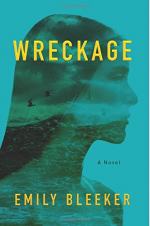 Emily Bleeker
This Study Guide consists of approximately 39 pages of chapter summaries, quotes, character analysis, themes, and more - everything you need to sharpen your knowledge of Wreckage.

This detailed literature summary also contains Quotes and a Free Quiz on Wreckage by Emily Bleeker.

“Wreckage” is novel of survival by Emily Bleeker which recounts the lives of stranded plane crash survivors Lillian Linden and Dave Hall on an island in the South Pacific before and after they are rescued. When the novel begins, Lillian and her mother-in-law are in the middle of a two-week all-expenses paid vacation in Fiji from a Carlton Yogurt contest. Lillian’s husband, Jerry, is at home with their two young sons, Josh and Daniel. Dave is a member of Carlton’s PR who always accompanies the contestants. His wife, Beth, is at home.

As Dave sadly reveals to a curious Lillian while they board a private jet for the second part of the vacation, he and Beth have been trying to have a baby for years. Their attempt at in vitro fertilization has just failed because Beth has missed required hormone shots. This annoys Dave to no end. Dave takes comfort in Lillian, who is friendly and outgoing. But forty-five minutes from their destination, one of the plane’s engines gives out. The plane falls into a storm and is rocked back and forth. The motion kills Theresa, the flight attendant, by breaking her neck. The plane crashes into the water. As it fills, Lillian helps Dave out of his seat. Dave inflates the life raft and then helps Lillian to rescue the unconscious Margaret. The plane’s captain, Kent, mans the radio until the last possible moment and then joins the others in the raft.

Kent is irate, believing that Dave and Lillian let Theresa die. Though Theresa did not return his feelings, Kent has been romantically interested in Theresa. Lillian, Dave, Kent, and the barely-living Margaret are adrift for three days. They finally sight an island that they paddle into. Margaret dies not long after. Lillian is distraught, but Dave pulls her back to reality through hugs and kind words. The three survivors then begin preparing for life on the island, not knowing when they will be rescued. They build a fire, a shelter, spears for fishing and hunting, collect fruits, discover a freshwater spring-fed pond, and quickly learn of the dangers of the island, such as sharks in the lagoon. They also do their best to keep focused on the situation at hand, rather than their lives in America.

Kent continues to be cruel, and Lillian can feel his gaze lingering on her as time goes by. Dave fashions a knife out of stone and wood for Lillian to use in self-defense should it ever be necessary. A few months into living on the island, Kent makes his move by attempting to rape Lillian. Dave intervenes, but Kent overpowers him. Lillian then kills Kent by stabbing him. Dave tells her that it was done only in self-defense. He mutilates Kent’s corpse to make it bleed, then shoves it into the lagoon for the sharks.

With Kent gone, Lillian and Dave have the island to themselves. More time passes. The two grow closer and closer until they realize they have fallen in love with each other. Eventually, Lillian becomes pregnant by Dave and gives birth to a baby boy that they name Paul James. Paul lives for three months, but then passes away unexpectedly one night. His death devastates Lillian and Dave. They are later rescued a year-and-a-half after they were first stranded when a realtor and a prospective buyer for the island arrive by helicopter.

Back home, Lillian and Dave struggle to return to life as normal with their families, though the love between them remains at first. Jerry confronts Lillian, telling her that she must choose either him or Dave. Lillian chooses Jerry. As the media swirls around Dave and Lillian, Genevieve Randall, famed Headline News reporter, suspects that the accounts Dave and Lillian have given of their time on the island are incomplete at best, and dishonest at worst. She undertakes an interview with them during which time Dave and Lillian cover up much of the trip. They say that Kent was killed by sharks while fishing, and that Paul was actually Jerry’s child born after the crash event. Genevieve cannot crack Lillian or Dave, and Jerry’s threats of legal suits if Genevieve does not back off help protect them. Genevieve’s theory is that Dave fell in love with Lillian who fell in love with Kent after which time Dave killed Kent.

It is ultimately revealed that Dave and his wife have gotten pregnant using donated eggs from Lillian. Jerry reveals to Lillian that he knew the truth about Paul all along. Lillian asks him to forgive her; Jerry says he already has. Further, he will not stop Lillian from seeing Dave and Beth’s baby. Lillian then confesses the one thing Jerry doesn’t know about: the real death of Kent. Jerry explains it was clearly done in self-defense and is not bothered by it. Dave and Lillian ultimately fall out of love, each falling back in love with their respective spouses.

More summaries and resources for teaching or studying Wreckage.