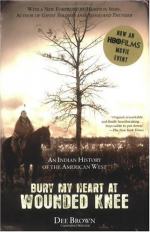 1860-1890: U.S. soldiers engage in several wars in the American West, in an attempt to acquire the lands of the Western frontier from the Native Americans who live there.

Late 1960s-Early 1970s: U.S. soldiers engage in an undeclared war in Vietnam, purportedly in an attempt to stop the spread of communism in Southeast Asia.

Today: An increasing number of U.S. soldiers occupy several parts of the globe, as part of the U.S. war on terrorism.

Late 1960s-Early 1970s: The American counterculture movement rebels against the ways of the wealthy corporate establishment, and many hippies dress like Native Americans and adopt their close-to-nature ways of life.

Today: On September 11, 2001, terrorists destroy one of the most prominent symbols of U.S. wealth and international power—the twin towers of the World...