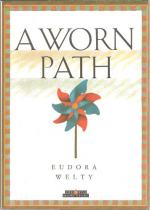 "A Worn Path" is told from a third-person limited point of view. This allows the reader to empathize with Phoenix, because her thoughts and actions are shown. Yet, in third-person, the reader is allowed to view Phoenix from a distance, and thereby see her as others see her.

The most obvious symbol in the story is Phoenix Jackson's comparison to the mythological bird, the phoenix. Dressed in vivid colors, Phoenix's resilience is underscored fay her comparison with a bird that rises from the ashes every 500 years. Additionally, Phoenix's grandson is described by the woman as "[wearing] a little patch quilt and peep out holding his mouth open like a little bird."

Welty has been praised from early on for her use of language. In using similes, she makes vivid comparisons that help the reader form a mind's eye picture of the action. Similes are...