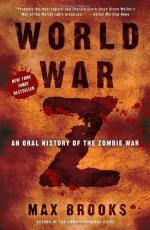 This detailed literature summary also contains Topics for Discussion and a Free Quiz on World War Z by Max Brooks.

World War Z: An Oral History of the Zombie War by Max Brooks follows the progression of a fictitious war between zombified humans and the living. The narrator, a fact finder for the Postwar Commission, has compiled numerous interviews over the course of several years and has chosen to place them into a book for future generations to analyze the war. The stories, from all countries and all populations, show the true strength of humankind, and the powerful forces that guide all civilizations.

The story begins with the tales of those who witnessed the first outbreaks of a disease that kills the living, and then reanimates the deceased to form living zombies. The first recorded outbreak occurred in China and spread quickly across the world due to inaccurate information, government cover-ups, illegal smuggling operations, and illegitimacy within the medical community. From irrational military strategy to the marketing of a vaccine known to have no effect, the actions of many entities cause a worldwide outbreak of the disease. As panic spreads across the nations, the citizens of the world attempt to flee the roving zombie masses who threaten their lives, while the military attempts to regain control. The zombies, while slow and lacking even basic intelligence, are nearly invincible, since no modern weapon kills them effectively. The only way to kill a zombie is to destroy the brain. As the military forces attempt to destroy the zombie masses, they learn quickly that without a solid action plan, all of humanity is doomed.

During this time, several experts put forth ideas to stop the zombies, but most are ignored. Finally, a man in South Africa thought to be a monster because of his complete lack of emotion, devises a plan called the Redeker Plan, which systematically lays out a military procedure to protect a few carefully selected populations within a country, and uses the remaining population as human bait. While harsh and inhumane, the solution seems to be the only hope. The stories of military professionals within the novel detail the implementation of the plan in several countries.

For a short time, the world is at a stand still as military and government officials try to keep small areas safe, while the zombies occupy much of the rest of the world. However, within a few months, the world decides to begin taking back their lands, and a full-scale war between zombies and the world military forces ensues. While the military eventually takes back much of the world, the populations across the globe will never be the same.

Told from both first and third person accounts, the story of World War Z is one that shows both sides of war in poignant detail. While political cover-ups and greed within the population serve to speed the spread of infection, the heroism and undying resilience of the human spirit allow civilization to prevail, even in the darkest of times. Although based on a fictitious conflict, World War Z is a novel about the true causes of war, and the extreme measures some will use to overcome adversity, as well as the overwhelming power of the human instinct to survive.