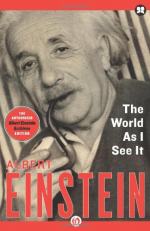 The World As I See It Summary & Study Guide

Albert Einstein
This Study Guide consists of approximately 34 pages of chapter summaries, quotes, character analysis, themes, and more - everything you need to sharpen your knowledge of The World As I See It.

The World As I See It Summary & Study Guide Description

The World As I See It Summary & Study Guide includes comprehensive information and analysis to help you understand the book. This study guide contains the following sections:

This detailed literature summary also contains Topics for Discussion and a Free Quiz on The World As I See It by Albert Einstein.

Originally published in 1956 as Mein Weltbild (My Worldview), this book is a compendium of letters, speeches, articles and essays by Albert Einstein on religion, politics, peace and faith. from the early 1920s to the late 1940s. It was published ostensibly to present to the world a coherent view of Einstein, the humanitarian. The first edition of the book contained essays by Einstein on relativity and scientific matters, but these were deleted from the republished edition of 1984. All of Einstein's writings were translated from German, his native language.

The bulk of these writings evidently cover the period before the outbreak of World War II, the detonation of the world's first atomic bomb and the formation of the state of Israel in the aftermath of that conflagration. Einstein's views on world Jewry, Zionism, Nazism and nationalism are appropriately poignant, given their historical locus. His views on science and faith, too, are unique and refreshing. The reader learns about Einstein's profound pacifism and his dislike for the military.

The editors state: "These fragments form a mosaic portrait of Einstein, the man. Each one is, in a sense, complete in itself; it presents his views on some aspect of progress, education, peace, war, liberty, or other problems of universal interest. Their combined effect is to demonstrate that the Einstein we can all understand is no less great than the Einstein we take on trust."

Fair enough. However the book suffers from a paucity of precise dates for its various components, as well as from a complete absence of any connective text that would elucidate the context for the disparate parts. The reader can't escape the suspicion that this book, published one year after the scientist's death, is merely the product of a box full of miscellaneous papers discovered among his effects and cobbled together—hastily and without any scholarly background that might have made his writings even more meaningful.

For example, when and under what circumstances did Einstein write his "Letter to the Schoolchildren of Japan?" Was it before or after the atomic bombs were dropped on Hiroshima and Nagasaki? As for another letter to Signor Rocco, Minister of State, Rome, on "Fascism and Science," when and why did he write it? What, exactly, was the Gumbel case, to which Einstein refers multiple times? How is it relevant to his work and his life? The text is, disturbingly, without any references or footnotes to answer such puzzles.

There are gems of thought and reflection within the book, but they lie scattered about within the mass of seemingly disconnected and disjointed writings; so the readers are left alone to try and make or invent the connections. One wonders if Einstein was as great a humanist as a scientist,as claimed by the editors in their introduction, then why hasn't anyone taken the time to show how these aspects of his life are integrated into the "mosaic" they claim lies within its pages?

Thankfully, the editors do provide a brief biographical sketch. Einstein was born in 1879 in Ulm, Germany where his father owned an electrochemical plant. Two years later, the family moved to Munich and Einstein went to school. Here he encountered "a rigid, almost military type of discipline and also the isolation of a shy and contemplative Jewish child among Roman Catholics." Although his teachers considered him unsatisfactory, a Jewish medical student sparked his interest in mathematics. "At the age of 14, [he was] a better mathematician than his masters," according to the introduction.

Then the family moved to Milan, where Einstein enjoyed a sunny respite from harsh northern weather and a break from school for a few months. Enrolling in the Polytechnic Academy in Zurich, he studied mathematics, science and philosophy. After he graduated, a possible teaching position failed to materialize. Therefore, Einstein went to work in the patent office in Berne where, by 1905, his first monograph on the theory of relativity was published. Soon he was offered a position as lecturer at the university in Zurich, then a professorship. A subsequent assignment at the University of Prague preceded a position as professor at the Prussian Academy of Sciences in Berlin.

But by the mid-1930s, Einstein announced that he could no longer work or live in any country that did not practice "political liberty, toleration and equality of all citizens before the law." Shortly thereafter, Einstein accepted a position at Princeton University as professor of mathematics and theoretical physics, where he remained until his death.

More summaries and resources for teaching or studying The World As I See It.

The World As I See It from BookRags. (c)2022 BookRags, Inc. All rights reserved.