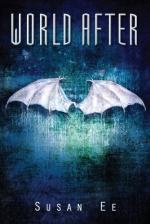 The novel is set just outside of San Francisco. Several times the characters go into the city in order to chase down angels or find supplies. San Francisco has been devastated by the arrival of the angels, which came with tsunamis, earthquakes, and flood.

The angels use Alcatraz as a laboratory for creating their locusts. Penryn sees the angels attempting to teach the locusts to fly over the island of Alcatraz.

Penryn, Clara, and her mother watch Alcatraz from Angel Island Pier. It is here that they are caught by the scorpion creatures and transported to Alcatraz.

The angels have created a new aerie on Half Moon Bay in a luxury hotel. Penryn goes here in the hopes of finding her sister, but instead runs into Raffe during a masquerade party. A blood bath breaks out and Raffe takes Penryn...