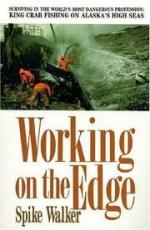 Spike Walker
This Study Guide consists of approximately 34 pages of chapter summaries, quotes, character analysis, themes, and more - everything you need to sharpen your knowledge of Working on the Edge.

Working on the Edge: Surviving in the World's Most Dangerous Profession: King Crab Fishing on Alaska's High Seas Summary & Study Guide includes comprehensive information and analysis to help you understand the book. This study guide contains the following sections:

This detailed literature summary also contains Topics for Discussion and a Free Quiz on Working on the Edge: Surviving in the World's Most Dangerous Profession: King Crab Fishing on Alaska's High Seas by Spike Walker.

Working on the Edge by Spike Walker is a non-fiction story of working in the most dangerous profession in the world, fishing in the Alaskan crab fleet. Spike Walker found himself on Kodiak Island searching for work on a crab boat about the time the great king crab boom hit Alaska's Bering Sea. In his own unique style, Spike Walker tells the story of his time on these boats as well as the stories of others who took the chance at fast money and adventure on the high seas and almost did not live to tell about it. Working on the Edge is an exciting tale of adventure in the world's most dangerous profession, but it is also a cautionary tale that warns would-be fishermen that easy money always comes at a high price.

Spike Walker arrived on Kodiak Island with only twenty dollars to his name and the phone number of a crab fishing boat skipper. Spike knew his chances of getting a job were slim when factored in among the hundreds of other fishermen out there looking for a place on one of the famous crab boats, but he felt his experience on the oil fields and lumber camps gave him an edge. Spike was lucky enough to have an old college buddy who ran his own boat and Spike soon found himself with a spot on the Royal Quarry during the tanner fishing season. The work was tough, especially when coupled with the sea sickness that dogged him every minute on deck, but Spike soon fell in love with the excitement of pulling up the crab pot and finding it loaded with crab. The work was tough, leaving Spike wondering how he got stuck on a boat with the only female crab fisherman in the fleet, but Spike left the Royal Quarry with a healthy respect for both the work and for Susy Wagner, the toughest woman he had ever known.

After leaving the Royal Quarry at the end of the season, Spike was lucky enough to be given a space on the Williwaw Wind. Life on the Williwaw Wind during king crab season was just as tough as it was during tanner crab season on the Royal Quarry, but was also made more difficult by a cynical skipper who often left Spike out on limb without instruction or support. Spike's time on the Williwaw Wind came to an abrupt end when Spike called his skipper out for abandoning him in the wheelhouse without radar during a critical fog. During this time Spike learned a great deal about king crab fishing. Spike also heard a great deal about the success of the fleet that season as well as the failures. Spike relates to the reader the story of the Jeffrey Allen that went down for unknown reasons, trapping a man inside. There was also the sinking of the Key West that season in which all men survived. However, the skipper would perish several years later when another boat he skippered would go down in the Bering Sea.

From the Williwaw Wind, Skip would join the crew of the Rondys. The Rondys was owned by a fishing family out of Newport, Oregon. Skip spent the summer making repairs to the Rondys and her crab pots without pay in exchange for a place on the crew during the king crab fishing season. Upon the Rondys' arrival in Alaska that season a strike was called by the crab fishermen. The canneries were refusing to pay what the skippers thought was fair, so they rallied together to fight for the fair market value of their catches. The strike lasted seven days; however, after the fishermen made their way to the Bering Sea, the canneries backed down and lowered the price of the crab once again. During this season, Spike began to be bothered by the lack of privacy on board the Rondys. Eventually Spike quit, deciding it was time to find new faces with which to share his living space. During his time on the Rondys, several boats went down in the Bering Sea and Spike shares their stories in his book. These include the Gemini, whose sinking nearly cost one crewman his legs.

After the Rondys, Spike found a place on board the Elusive during the peak of the king crab fishing boom. During a turn at the wheel, Spike heard the mayday of a nearby boat. The captain rushed to the scene and they watched as the men were plucked from the sea and rescued by another crab boat, the Cougar. The skipper of the Elusive attempted to tow the sinking City of Seattle to shallow ground, but the boat proved to be too heavy for the Elusive's heavy howser line. Many other crews suffered great losses that year, including the crew of the St. Patrick who lost eight of ten crewmen when they went into the water under the opinion that the boat was about to sink. Unfortunately, the St. Patrick remained afloat throughout the terrible storm that convinced its skipper of its imminent demise.

After the boom years of the late seventies, the king crab suddenly began to disappear. The king crab season was canceled outright several years in a row due to the low number of catchable crab. It was later determined that the crab suffered from an illness that left the females infertile, but for a time the government labored under the opinion that overfishing had caused the decline. Eventually the Alaskan fleet would rebound and fishing would resume. Men would also continue to die. When Spike Walker attended a memorial ceremony in St. Paul Harbor in 1988, the bell that rang for the dead from the previous year rang forty-two times.