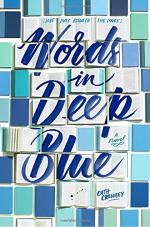 Crowley, Cath
This Study Guide consists of approximately 46 pages of chapter summaries, quotes, character analysis, themes, and more - everything you need to sharpen your knowledge of Words in Deep Blue.

This detailed literature summary also contains Quotes and a Free Quiz on Words in Deep Blue by Crowley, Cath.

The following version of this book was used to create the guide: Crowley, Cath. Words in Deep Blue. Ember, 2016.

Rachel dropped out of school due to her brother drowning, and is now heading back to the town where she grew up. She and her mother mourn her brother daily, but she decides to live with her aunt instead. Henry is sitting in his family bookshop, Howling Books, when his girlfriend Amy breaks up with him. He thinks back to the night they got together, a night the students at his school pretended was the last night of the world. Before that night, he was always best friends with Rachel. However, he ditched her for Amy that night.

Rachel had always a secret crush on him, and left him a love letter before she moved away. When she moves back, the first thing she does is go to her old friend Lola’s band’s show. Rachel also finds a job at Henry’s family’s bookshop, recording the marginalia, letters, and markings left by people in the lending library that is a part of the bookstore.

On the street before the show, she bumps into Henry. Though she wanted to avoid him, they go into the venue together. He drinks to the point of oblivion when seeing Amy there with a boy he thinks is a douchebag— Greg Smith. When Greg pushes him, Henry falls down and only Rachel helps him up while Amy watches.

Rachel finds out that Henry never received her love letter while he is drunk, and he kisses her without realizing it. Upon waking up, Henry decides that Amy must have left him because Greg is richer. His parents have been deliberating selling the profitless book store for some time, and Henry decides to vote for the sale in order to get Amy back.

Someone using the name “Pytheas” regularly exchanged letters with Henry’s younger sister, George years ago. Their relationship advanced to the point where he asked her out anonymously, and she accepted. Now, a boy named Martin tries to exchange letters with George too, but she is angry about it due to his associations with a bully at her school. Henry decides that he, Rachel, Martin, and George will go to a party together. However, both pairs end up fighting within themselves and the night ends miserably for each of them.

Up until this point, Rachel has not told anyone in Gracetown of her brother Cal’s death. However, she opens up to Henry and he responds with kindness. This changes something in their relationship, and they become best friends again. When George tricks Martin into going to a dangerous area, and Henry goes with him, they get kidnapped by Greg and his friends. They are duct taped to poles, naked, and they have to wait for Rachel to save them.

Rachel, Lola, and George save Martin and Henry. Afterward, Rachel and Henry have a heart-to-heart in the bookshop. That weekend, Rachel, all give of them go out to dance. Rachel kisses Henry while Amy is watching, and says it is to make her jealous. It works, as Amy apologizes to him soon after and they get back together. Henry also decides to keep the bookshop, but forgets to tell his parents. In the meantime, the bookshop is been sold.

Rachel confesses her love for Henry, and right when Henry is about to respond, Amy appears and kisses him. This makes Rachel cry and run away, while Henry realizes that Amy has been wrong for him all along. While crying, Rachel finds George and explains to her that Cal was Pytheas, but he passed away. Rachel has Cal’s last note to her. Henry returns, confessing his love for her. They kiss.

Rachel realizes that just because the bookshop is being sold doesn’t mean the marked-up books have to be lost. She convinces Henry and his family to help hide the books around the city, and they keep the library alive. With this peace, Rachel returns to scatter Cal’s ashes in the sea.

More summaries and resources for teaching or studying Words in Deep Blue.