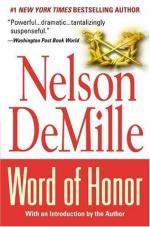 Word of Honor Topics for Discussion

Nelson Demille
This Study Guide consists of approximately 38 pages of chapter summaries, quotes, character analysis, themes, and more - everything you need to sharpen your knowledge of Word of Honor.

Describe how Tyson came to know that someone had told about the massacre. How did Picard come to know about it? What is Tyson's initial reaction? How does that change?

What piece of information from Marcy's past is brought up as Tyson's case moves forward? What is Tyson's reaction to this? Marcy's? David's?

Explain the strategy used by Tyson and Corva with regard to putting witnesses on the stand who will back his version of events at the hospital. What happens to their plans on this point? Why?

What does Corva say is true of all war stories? Provide three examples that support his statement.

Describe Tyson's personality. What are his reactions when he is being recalled to duty? When he realizes that capital punishment hasn't been removed from the...

More summaries and resources for teaching or studying Word of Honor.