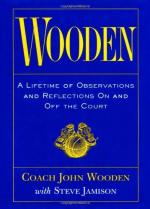 John Wooden
This Study Guide consists of approximately 19 pages of chapter summaries, quotes, character analysis, themes, and more - everything you need to sharpen your knowledge of Wooden.

This detailed literature summary also contains Topics for Discussion and a Free Quiz on Wooden by John Wooden.

Wooden is a book that was written by legendary basketball coach John Wooden, with help from Steve Jamison. The book describes Wooden's personal philosophies that have been the basis for his life on and off the basketball court.

John Wooden starts out describing the importance of family, virtues and the values he has found to be important. He describes his background that gave him the basis for his ideals and values described in the book. He explains what he has found in his life to be the things that have made him so successful in basketball have also made him very successful in his marriage. He describes what he thinks has changed in the home in recent decades and what should be important to everyone.

The next part of the book describes Wooden's take on success, achievement and competition. He talks mostly about the necessity for preparation and how you will succeed when you give all you have toward the goal you have set. Wooden tried to live his life by the principles he describes in his book and he tries to relay how they have made his life better. He describes his achievements and disappointments and how they are described by him. He doesn't find that loosing a game counts as a failure if you made the decision with the right information at hand. He also talks about details being necessary for success. He also says that personal goals and individual recognition should come second to the teams goals.

The third part discusses coaching, teaching and leading. Wooden's parents helped to put him on the path to teaching and he gave up an opportunity to play ball with the New York Celtics in 1932 to continue his teaching even though teaching paid far less. He puts high value on mentors and being a role model to those around you. He feels that it is everyone's job to be a good role model because you never know who is watching. He believes in motivating more than punishment and that you should always set attainable goals that you will have to work very hard to reach.

In fourth part of the book Wooden discusses his pyramid of success that he spent fourteen years developing. He states that many people, including Kareem Abdul-Jabbar, have found the pyramid corny but later found that it was true and has influenced their lives in many ways. Wooden talks about the levels of the pyramids and how they are all formed together with faith and patience being the mortar that keeps the pyramid together. He also describes his own definition of success that allows for failure as long as you are at peace with yourself knowing you tried your hardest and prepared to the best of your ability. He says the two people that were responsible for him developing the pyramid were his father and Mr. Shidler, his former teacher.

More summaries and resources for teaching or studying Wooden.