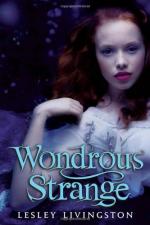 Kelley Winslow is a 17-year-old girl. She is living in New York after graduating high school early. Kelley is working as an understudy in a Hoboken production of a Midsummer Night's Dream. Kelley has been living in New York for six months and attended and dropped out of a theater training program.

Kelley's parents died 12 years earlier. When they died, she moved in and is raised by her Aunt Emma. As the story unfolds, Kelley finds out that she was abducted from the Otherworld as a baby by her Aunt Emma, and that her real parents are King Auberon and Queen Mabh. The four-leaf clover necklace she wears around her neck is a gift from her Aunt Emma, but is really a gift from the Fae that stole her and gave her to Aunt Emma.

When her mother, Queen Mabh wreaks havoc on Central Park in an...