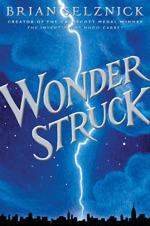 Selznick, Brian
This Study Guide consists of approximately 43 pages of chapter summaries, quotes, character analysis, themes, and more - everything you need to sharpen your knowledge of Wonderstruck.

This detailed literature summary also contains Quotes and a Free Quiz on Wonderstruck by Selznick, Brian.

The following version of the novel was used to create this study guide: Wonderstruck. Brian Selznick. New York: Scholastic, 2011.

In 1977, Ben Wilson lives with his aunt, uncle, and cousins. Ben’s mother, Elaine, died in a car accident a few months ago and Ben is struggling to adjust. Ben was born deaf in one ear and has no idea who his father is. One summer night, Ben sneaks into his old house (located very close to his aunt and uncle’s house) to find his cousin Janet wearing his mother’s old clothes and smoking her cigarettes. She agrees to allow Ben to stay in the house for a while if he does not tell her parents about her smoking. While exploring his mother’s old bedroom, Ben finds a book called Wonderstruck which is about President Theodore Roosevelt and how he founded the American Museum of Natural History. In the pages of the books, Ben finds a bookmark from a store called Kincaid’s Books in New York City. The bookmark has an address and a phone number written on it. Ben then finds a locket with the picture of a man who shares his eyes. The picture is labeled on the back with the name “Daniel.” Ben decides this must be his father, whom he has never met and nervously calls the number on the bookmark. As the he hears the dial tone, Ben is struck by lightning from an intense storm outside. Ben wakes up in the hospital disoriented. He is now completely deaf and the doctors are unsure if his hearing will ever return. Ben cannot stop thinking about the new clues about his father’s identity so he decides to run away and hops on a bus to New York City.

In the 1927 narrative (presented in alternating segments with Ben’s story), a young girl named Rose is in her room in Hoboken, New Jersey. Her room overlooks the Hudson River and she can see the New York City skyline in the distance. Rose collects newspaper clippings and pictures of Lillian Mayhew, a silent film star. Rose sneaks out of her house to see a movie starring Lillian Mayhew and finds out her favorite movie theater is switching to sound pictures over silent films. This change upsets Rose because she is deaf. Distraught, Rose packs a suitcase and takes the ferry to New York City.

Once Ben arrives in New York, he first goes to the address written on the bookmark he found. Hoping his father is there, he is disappointed to find out his father no longer lives there. He then wanders to Kincaid’s Books, the bookstore advertised on the bookmark, only to find it is boarded up and out of business. Feeling dejected, Ben enters the nearby American Museum of Natural History. While wandering through the museum he realizes he has lost his museum box, a box of trinkets which he found or procured with his mother. Ben then finds a note near a display featuring a meteorite which reads, “What’s in the box?” The note also has a map which leads to a diorama of wolves, surprisingly set in his hometown of Gunflint Lake, Minnesota. At the diorama, Ben meets a boy named Jamie who found Ben’s box outside. Jamie’s father works at the museum and he spends a lot of time unsupervised there. Jamie brings Ben food and tells him he can stay in an unused room in the museum for as long as he needs.

In 1927, Rose arrives in New York City and goes to a theater where Lillian Mayhew is rehearsing a play. She sneaks through the stage entrance and finds Lillian on stage. Lillian sees Rose and become enraged and brings her to her dressing room. It is revealed Lillian is Rose’s mother and does not live with her anymore. Rose desperately misses her mothe, but Lillian does not seem to want much to do with her. Lillian locks Rose in her dressing room, but Rose escapes through a window. Rose walks to the American Museum of Natural History and wanders through the museum. She is eventually seen by a security guard who frightens her and causes her to run away. She runs through the museum and ends up hiding in a new exhibition. She is found by a docent named Walter who is her brother. Rose leaves the museum with Walter and goes to his apartment. Walter owns the same copy of Wonderstruck which Ben found in his mother’s room.

In 1977, Ben spends the next week or so exploring the museum with Jamie. They go to places like the planetarium and the expansive file room. Jamie leaves for a few days which prompts Ben to want to find out more about the wolf diorama which is set in his hometown. He goes to the file room and finds a folder about the diorama. In the folder, Ben finds a letter from Daniel Lobel (the man whose picture is in the locket) to his mother asking for help researching the wolves in Gunflint Lake for the purpose of making the diorama. Ben realizes his father, Daniel, works at the museum and Ben frantically asks anyone who will listen if they know him. After not being able to find out any more information, Ben returns to the room he is staying in to find Jamie. Ben tells Jamie of the new information he has, but does not know what to do next. Jamie admits Kincaid’s Books is still open but it had moved. Jamie had not told Ben this because he was worried Ben would leave and Jamie likes having Ben around. Ben angrily storms out of the room and goes to Kincaid’s, hoping to find out more information about his father.

In Part Three of the novel, Rose and Ben’s narratives intersect with the illustrated portions taking place in 1977 and featuring an older Rose. Ben arrives at Kincaid’s Books and finds it empty so he decides to patiently wait. An old woman arrives and begins speaking sign language with an old man behind the counter. Ben is fascinated by the sign language, which causes him to become distracted and fall. When Rose approaches Ben to see if he is alright she notices the locket he is wearing around his neck. She opens the locket and sees the picture of Daniel, her son, and immediately knows this young boy is named Ben.

Communicating through writing notes, Rose explains Daniel is her son which makes Ben her grandson. She tells Ben she will answer all his questions, but needs to show him something first. She takes Ben on a long subway ride to Queens and takes him to the Queens Museum of Art. Inside the museum Rose shows Ben the Panorama, a scale replica of New York City Rose has helped build for the 1964 World’s Fair. Rose now works at the Queens Museum of Art updating the Panorama whenever new buildings are built. Rose explains the Panorama also serves as the story of Ben’s father as Rose has hidden artifacts from Daniel’s life in the models. Rose tells Ben that Daniel met Ben’s mother while he was researching the wolves of Gunflint Lake to build the diorama. He fell in love with Ben’s mother, but she did not want to move so their relationship ended. A few years later, Daniel passed away from a heart condition. Ben’s mother attended Daniel’s memorial with a young Ben in tow, meeting Rose but not telling her who they were. Rose always suspected Ben could be Daniel’s son, but did not have a way to find out.

Suddenly, the electricity in the museum cuts out. Ben and Rose gingerly make their way back to the lobby and see a bright flash outside. It is Jamie flashing his camera trying to get their attention. He had followed them there all the way from Manhattan. The loss of electricity was due to the real-life New York City Blackout of 1977. Rose, Ben, and Jamie wait on the roof of the museum for Walter to pick them up. They stare off into the blackened skyline of Manhattan and Ben feels a new sense of place in the world with his newfound family and friends in New York.

More summaries and resources for teaching or studying Wonderstruck.