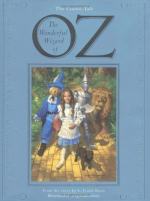 L. Frank Baum
This Study Guide consists of approximately 39 pages of chapter summaries, quotes, character analysis, themes, and more - everything you need to sharpen your knowledge of The Wonderful Wizard of Oz.

The Wonderful Wizard of Oz Summary & Study Guide includes comprehensive information and analysis to help you understand the book. This study guide contains the following sections:

This detailed literature summary also contains Quotes and a Free Quiz on The Wonderful Wizard of Oz by L. Frank Baum.

As the story opens, Dorothy is in the little house she shares with her Aunt Em and Uncle Henry in Kansas. She’s a bright, brave little girl and loves to play with her dog, Toto. One day a storm is coming and Aunt Em is rushing for the tiny cellar when the cyclone picks the house up with Dorothy and Toto still in it. The house is in the air for a long time and Dorothy eventually takes a nap. She’s on her bed when it falls to land. When she opens the door, she is amazed by the sights that greet her. She soon discovers that her house dropped out of the sky on the Wicked Witch of the East and her death has freed the race of tiny people who have lived as her slaves. The witch’s body soon dries up and the Good Witch of the North tells Dorothy she is entitled to take the witch’s silver shoes, which she does.

Dorothy says she wants to return to Kansas and is told the great Wizard of Oz will be the only person who might help her on her way. She heads toward Oz’s home in the Emerald City. Along the way she encounters the Scarecrow who is hanging helplessly on a pole in a field. He wonders if the Wizard might be able to give him brains and decides to go along with Dorothy. They spend their first night on the road in a small abandoned house and find the Tin Woodman the following morning. He explains that he was caught outside in the rain, which rusted his joints, and he has been standing in one spot for a year. Dorothy oils his joints and he decides he’ll accompany them, hoping the Wizard will give him a heart. They soon encounter a Lion who tries to bite Toto but when Dorothy hits the beast on the nose, he admits that he’s a great coward. He joins the group, hoping the Wizard will be able to give him courage.

They finally reach the Emerald City and the Wizard tells them he will only grant their wishes if they kill the Wicked Witch of the West. They feel they have no choice and head west. Dorothy and the Lion are captured by the witch who notices Dorothy’s silver shoes and begins to look for a way to steal them. One day she manages to get one of them and, in anger, Dorothy throws water on her. She immediately melts away, setting free the race of people she’s held as slaves and making it possible for Dorothy and the Lion to reunite with the Scarecrow and Woodman.

Back in Oz, Dorothy and the others discover the Wizard is nothing more than an ordinary man who arrived in the land by accident just as Dorothy did. He grants the Scarecrow, Tin Woodman, and Lion their wishes and comes up with a plan to get home with Dorothy by way of hot air balloon. Toto runs away at the moment before Dorothy is to board and he leaves without her. They learn that Glinda the Good, the Witch of the South, can likely help Dorothy find her way home and make their way there. After many adventures, they arrive and Dorothy discovers she has only to tap the heels of the Silver Shoes together and wish to be home. She does and arrives back in Kansas to find Uncle Henry has built a new house. She rushes toward Aunt Em, shouting that it’s good to be home.

More summaries and resources for teaching or studying The Wonderful Wizard of Oz.

The Wonderful Wizard of Oz from BookRags. (c)2022 BookRags, Inc. All rights reserved.