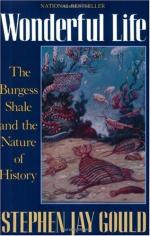 Wonderful Life: The Burgess Shale and the Nature of History - Remainder of Chapter 3 Summary & Analysis

Stephen Jay Gould
This Study Guide consists of approximately 24 pages of chapter summaries, quotes, character analysis, themes, and more - everything you need to sharpen your knowledge of Wonderful Life.

Remainder of Chapter 3 Summary and Analysis

The Burgess Drama has five acts. Now that Gould completes it, he has some comments that divide into three general classes.

First Gould analyzes this "disparity followed by decimation" by making a general statement. The Burgess Shale is such an amazing find because of its soft-bodied creatures. It contains a vast array of life but the Burgess Shale lesson is taught by the soft-bodied creatures. From the Burgess Drama, we acquire three general Burgess revisions—we now have new major groups within a phylum, we have new phyla and we have a distinct picture of multi-cellular animal life.

We also learn that the structure of evolutionary inference is quite complex. First, the classification of animal species cannot be made on the basis of similarities and differences alone. Instead, evolutionary biologists must specify types and sub-types of...

(read more from the Remainder of Chapter 3 Summary)

More summaries and resources for teaching or studying Wonderful Life: The Burgess Shale and the Nature of History.

Wonderful Life: The Burgess Shale and the Nature of History from BookRags. (c)2022 BookRags, Inc. All rights reserved.