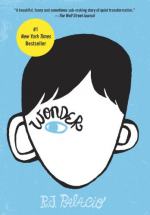 This detailed literature summary also contains Topics for Discussion and a Free Quiz on Wonder by R. J. Palacio.

"Wonder" by R. J. Palacio tells the story of ten-year-old August. The boy was born with a face that horrifies most who look upon it. Over the years, he had countless surgeries, so he was home-schooled. Now, he's about to enter the fifth grade in a regular school. This story is told from his perspective as well as from his sister's, her boyfriend's and friends' perspectives.

August goes to check out the school before he attends, and he meets some students. Two are nice, but one is somewhat mean to him. The first day of school is all right. Most people don't want to be near him, but his new friend, Jack, stays near him during classes. A girl named Summer joins him at lunch.

Even though many of the kids stay away from him and seem scared to touch him, August enjoys school. He's a good student and excels in his classwork. Halloween is Auggie's favorite holiday. With everyone in costume, his face is covered, and he's as close to "normal" as he ever gets. During his first Halloween at school, he overhears Jack tell the others that he doesn't really want to be friends with Auggie. This puts a distinct rift in the relationship.

As Auggie struggles to fit in socially at school, his sister is trying to figure out who she is and where she stands at home and in high school. Her old friends have left her, and she has a new boyfriend.

Jack realizes that Auggie overheard what he said, and he misses his friend terribly. They make up and become friends again, although the other kids start being mean to Jack as a result of the friendship.

The entire fifth grade goes on a retreat, and while they are there, strange kids bully Auggie. Several of his classmates stand up for him, and it creates a new bond among them. Word gets out around school regarding the situation, and everyone begins to get along. Auggie fits in like he never has before. Other kids see how smart and funny he is.

Meanwhile, back at home, Via is learning a lot about herself and her own capacity to love. She reconnects with Miranda, her former friend, and also reconnects with Auggie. The two had spent less time with each other as they struggled with the changes in their lives.

At the end of fifth grade, Auggie and his classmates celebrate their graduation. It's a joyous time, and Auggie shows that he is really growing up. The principal talks with the people at the graduation about the importance of being kinder than necessary. He emphasizes the power of friendship. When it's time to give out awards, Auggie gets the most prestigious award. Everyone cheers him on and gives him a standing ovation. On the way to a party, he thanks his mom for making him go to school. She thanks him for being such a wonder.