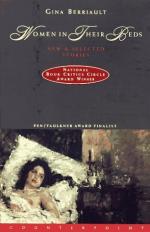 Women in Their Beds Characters

Gina Berriault
This Study Guide consists of approximately 38 pages of chapter summaries, quotes, character analysis, themes, and more - everything you need to sharpen your knowledge of Women in Their Beds.

One of Angela's patients is an alcoholic woman in her fifties. Angela surmises that she "must have run away from home at nine and kept on running." Angela tells her that she has been assigned for transfer to an undesirable public institution. The woman says that her daughter will come to the hospital and prevent it, but the daughter does not come. This reminds Angela of her relationship with her own mother and the grief of mother-child separation.

Angela's current lover is a painter. She is not in love with him. She describes him as a "friend, who is as much in need as myself of a friend to lie down with, make love with, share the rent with, share soup with, break bread with, and lie down with again." Sharing these things with him makes life easier but does not mitigate the loneliness she...

More summaries and resources for teaching or studying Women in Their Beds.

Women in Their Beds from Gale. ©2005-2006 Thomson Gale, a part of the Thomson Corporation. All rights reserved.