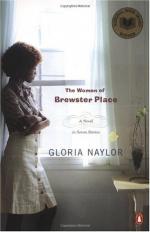 Gloria Naylor
This Study Guide consists of approximately 102 pages of chapter summaries, quotes, character analysis, themes, and more - everything you need to sharpen your knowledge of The Women of Brewster Place.

Rain began the afternoon of Ben's death and continued for an entire week so the people of Brewster Place could not congregate at the wall to go over the whys and hows of his dying. They met in twos and threes, confined to their own homes. Children became listless; men stay away longer at night; the bars are doing a good business. By midweek, the hopes of the block party start to disappear.

Only a few women admit they have dreamed about the tall woman in the bloody green and black dress. Little girls wake up screaming and mothers have no good answers. Even Mattie's sleep is fitful.

The block party is happening. A teenage boy asks Etta Johnson to dance and she accepts. Mattie chides her to act her age. Bantering back Etta tells her she is thirty-five; Mattie says Etta has...

More summaries and resources for teaching or studying The Women of Brewster Place.

The Women of Brewster Place from Gale. ©2005-2006 Thomson Gale, a part of the Thomson Corporation. All rights reserved.