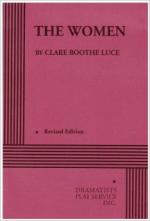 Kiss the Boys Goodbye (1938) was one of Luce's most successful plays. This farcical comedy concerns the antics of a Hollywood producer in the process of recruiting a star for his upcoming movie.

Margin for Error (1939), another of Luce's most successful plays, is a satirical detective story about a German consul who is suspected of murder.

Europe in the Spring (1940) is a personal memoir of Luce's experiences as a journalist in the early years of World War II.

Luce's plays have been compared to those of the Pulitzer Prize—winning playwright Wendy Wasserstein. Wasserstein's comedy Uncommon Women and Others (1977) concerns five women who meet for lunch and reminisce about events from their college years.

Rage for Fame: The Ascent of Clare Boothe Luce (1997), by Sylvia Jukes Morris, provides a critical biography of Luce, focusing on her ambitious personality and her...