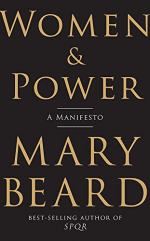 Mary Beard
This Study Guide consists of approximately 23 pages of chapter summaries, quotes, character analysis, themes, and more - everything you need to sharpen your knowledge of Women & Power.

The following version of this essay was used to create this study guide: Beard, Mary. Women & Power: A Manifesto. London Review of Books, 2017.

Published in 2017, Women & Power: A Manifesto is a revised book of essays based on a two separate lectures Mary Beard gave between 2014-2017. The two essays in the book, “The Public Voice of Women” and “Women and Power,” both use ancient literature and mythology to demonstrate the ways that precepts from the past still influence the way that modern women’s inequality is coded in stories from thousands of years ago.

The book opens with a Preface, in which Beard uses her mother as a way of introducing the ideas and concepts that will follow in the essays. Beard says that women’s rights have advanced a lot in her own mother’s lifetime, but complete equality is still not a reality. Beard turns to her first essay, “The Public Voice of Women,” where she explores how women are excluded from the opportunity to have their voices heard in the public domain. Opening with Telemachus’ dismissal of his mother Penelope from the Odyssey, Beard argues that turning to these ancient narratives can help elucidate the manner in which women are still excluded from the public sphere. Beard draws from a wide range of sources, from myths from Ovid’s Metamorphoses, to a Henry James novel, to demonstrate the way that women’s voices are not taken seriously and even viewed as a threat to the public domain. In modern day, women, especially public figures, are often told to “shut up” and receive an unprecedented amount of harassment for simply voicing an opinion. Some ancient narratives depict ways that women can have their voices heard despite male resistance, such as the stories of Fulvia and Philomela. Beard concludes by suggesting that these ancient narratives help elucidate some of the modern day biases against women in the public sphere, and that awareness of these classical tales allows us to reflect on our current conventions and practices.

The second essay, “Women in Power,” looks at the ontological implications of power, and how it has traditionally been coded in masculine terms. She considers how female politicians such as Hillary Clinton and Angela Merkel have to present in a more masculine way to be taken seriously. Turning to ancient history and mythology once again, Beard explores portrayals of “powerful” women in the past – such as Clytemnestra, Athena, and Medusa – and deduces that women who break gender conventions such as these end up being categorized as “monstrous hybrids” or masculine. Significantly, the biases inherent in these ancient narratives are still seen in modern society; the image of Medusa, for example, is frequently utilized to disparage female politicians. Beard writes that one way women can reclaim the stereotypes and derogatory remarks hedged against them is to show an awareness of them; however, she acknowledges that this will not solve the prejudices against women that are embedded within structures of power. Ultimately, power itself needs to be reconceived, but the way that this is to occur on a large-scale is unclear. Beard concludes with a reference to Charlotte Perkins Gilman’s novel Herland, which suggests that despite advances in gender equality, we will continue to live in a patriarchal society for the foreseeable future.

More summaries and resources for teaching or studying Women & Power: A Manifesto.