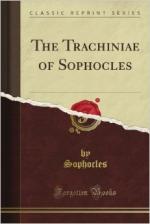 Sophocles
This Study Guide consists of approximately 27 pages of chapter summaries, quotes, character analysis, themes, and more - everything you need to sharpen your knowledge of Women of Trachis.

Achelous is the river god who desires to marry Deianira. He appears as a bull, as a snake, and as a bull-faced man trying to court his would-be bride until Heracles conquers him in a violent fight.

The play's Chorus consists of a group of women from the town of Trachis. These women are the commentators and advisors to whom the title of the play refers. According to the conventions of ancient Greek tragedy, they speak directly to the audience and help to explain the context of the plot, although they also become emotionally involved in the action and do not speak with complete objectivity. They are close to Deianira and attempt to advise her, and Deianira confides in them as friends even though she chides them for being young and innocent, uninitiated into the tragedy of life. They criticize Deianira for losing hope in her husband...

More summaries and resources for teaching or studying Women of Trachis: Trachiniae.