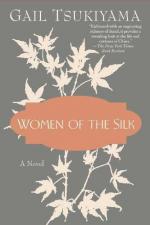 Gail Tsukiyama
This Study Guide consists of approximately 40 pages of chapter summaries, quotes, character analysis, themes, and more - everything you need to sharpen your knowledge of Women of the Silk.

Women of the Silk Summary & Study Guide includes comprehensive information and analysis to help you understand the book. This study guide contains the following sections:

This detailed literature summary also contains Topics for Discussion and a Free Quiz on Women of the Silk by Gail Tsukiyama.

Women of the Silk is a story about China's silk trade. The main character, Pei, was dedicated to the trade in her youth. Her family were farmers, whose land was cultivated with mulberry leaves and fish. Their days were labor intensive and their evenings were quiet. Their home was filled with silence instead of childhood laughter. Daughters traditionally left home to marry, but when finances were tight and no marriage prospects were imminent, their boisterous third daughter, Pei, was sent away to work in a silk factory.

The city Pei was sent to was called Yung Kee. Compared to the village she came from, it was a metropolis and she was intimidated. Eventually she began to appreciate her new-found freedom. She roomed at a boarding house simply called the girls' house. It was run by a matron and retired silk worker named Auntie Yee. Auntie Yee was a sweet woman who took excellent care of the girls living under her roof. Pei was befriended by a girl older than herself named Lin, as well as by a girl who was her contemporary named Mei-li. Mei-li's smile was contagious, and she and Pei always had fun together. Lin reminded Pei of the sister she was forced to leave behind. Her older sister, Li, had always showed her how to behave and instructed her on many things. Lin took over in this capacity and helped Pei establish herself at the silk factory. Pei was used to a farmer's life with little fun, but the factory was demanding as well. The girls worked long days in poor conditions. Many were injured while at work. Pei acclimated well and was promoted multiple times. This brought her pride, but she still struggled with feelings of being abandoned by her family.

Throughout her life Pei encountered many hardships. Her friend Mei-li committed suicide after being spurned by her secret lover and forced into an arranged marriage. She and her co-workers united to form a strike that rewarded them with improved working conditions at the factory. This was a small victory, though, because a friend died in the process. China was at war with Japan and the country was in a state of fear. Pei, Lin, and Ji Shen decided to leave China and go to Canton to start again. On the eve of their departure Lin was trapped in a burning silk factory and died. Despite her many losses, the story ends with Pei and Ji Shen traveling to Hong Kong to start a new life for themselves, hopefully happier and safer than where they came from.

More summaries and resources for teaching or studying Women of the Silk.

Women of the Silk from BookRags. (c)2022 BookRags, Inc. All rights reserved.