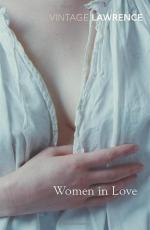 D. H. Lawrence
This Study Guide consists of approximately 40 pages of chapter summaries, quotes, character analysis, themes, and more - everything you need to sharpen your knowledge of Women in Love.

This detailed literature summary also contains Topics for Discussion and a Free Quiz on Women in Love by D. H. Lawrence.

Ursula and Gudrun Brangwen are sisters who live in Beldover England. Ursula is a school teacher and Gudrun is an art teacher who has made a reputation for herself as an artist. The two women are in their twenties, and they are looking for love. When they meet Rupert Birkin and Gerald Crich, respectively, they struggle with their lovers and with their own natures, to try to make the marriages that will fulfill them against the dissolution and degeneration of their industrial times.

Ursula and Gudrun are used to living their own lives after their own fashions, and marriage is an oppressive thought to both of them. They could never marry the way their parents have. They enjoy their liberty too much. Ursula meets Rupert Birkin, the school inspector for her district, and Gudrun meets Gerald Crich, the son of a mine-owner, and they each begin their respective courtships. Rupert Birkin is already in a relationship with Hermione Roddice, a wealthy aristocratic woman, but she is highly intellectual and Birkin resents how she wants to know everything in her mind, without having any physical knowledge of things, and he begins to wind the relationship down by denying and contradicting and otherwise rebelling against Hermione.

The two couples are drawn together by a number of incidents: Gerald's father is dying, and as he prepares to take over the mines, he confronts the problem of the business, and has to learn how to be more and more efficient in the extraction of coal from the earth. Lawrence describes him as a Northern type, blond and vigorous, and he is somewhat machinelike as well, in how he tunes the business to the extraction of coal. This process wears down his spirit, though, and he seeks some quality of Gudrun to rekindle his humanity. Gudrun is a second child, aloof, ironic, and highly skilled in making art—but she does not have the flexibility to accommodate the demands Gerald makes on her: she can give him the peace he wants, but it costs her a highly-uncomfortable period of self-awareness. She struggles with him, and their relationship really begins when she strikes him across the face over a trifling comment he makes: he allows her this act of superiority, and her violence even seems to prove her vigor to him, but it costs him some self-esteem as well, to let her trample him, and he remains competitive.

Ursula and Birkin are different, more flexible but also more intellectual. Birkin knows what he wants in a woman. He wants a relationship beyond personal love where two people trust each other so much and trust themselves so much that they can remain committed to each other and through their commitment to each other, allow each person to remain who they are. He wants a woman to accept him in his own personality and he wants to do this for a woman in turn. Ursula and Birkin debate these ideas to the point of frustration, and Ursula ultimately extracts the simple statement from him. He tells her that he loves her and she is satisfied. But she also knows what he means and they share this abstracted devotion to the universe through each other.

The book comes to its climax in the trip the two couples make to the Alps, where Ursula and Birkin are setting out on their world travels (they have renounced their jobs in England, and are going to look for a place where they can foster their relationship itself) and Gerald and Gudrun are entrenching themselves in their opposition against each other. As Gerald starts to really try to make Gudrun submit, she befriends a homosexual German artist names Loerke, who is a guttersnipe, someone without any power or position, but a deep reserve of irony and sarcasm with which to comment on everyone else's illusions. When Gerald gets exasperated and strikes Loerke, he then starts to strangle Gudrun, and he is satisfied by the idea of strangling her, it feels like the absolute act that will fulfill him. However, Loerke comes to and makes an ironic statement. Gerald can see the foolishness of the act and so he releases Gudrun and walks out into the snow, where he ultimately freezes to death.

Ursula and Birkin had left Gerald and Gudrun in the mountains together, but they return, and Birkin laments the death of his close friend. He had tried to have a friendship surpassing friendship with Gerald—he wanted to be nearly married to his friend, but Ursula tries to make him believe that one marriage is enough, and that she will be what Birkin needs in the world. Gudrun follows Loerke back to Germany, and continues to practice her art, but it seems by the end of the novel that she has abandoned the hope of a final and fulfilling love like her sister has with Birkin.

More summaries and resources for teaching or studying Women in Love.