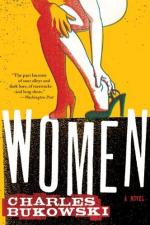 Charles Bukowski
This Study Guide consists of approximately 56 pages of chapter summaries, quotes, character analysis, themes, and more - everything you need to sharpen your knowledge of Women.

Henry Chinaski is an aging white male alcoholic who gains fame as a poet. He performs various readings, pursues alcohol with a vengeance, and meets various people along the way. Henry finds men largely uninteresting and chooses to focus nearly all of his attention on women and for Henry, women equate nearly entirely with sexual intercourse. Over the course of the novel Henry describes sexual relationships with a variety of women in a variety of circumstances which eventually become monotonously repetitive.

The novel covers a period of about six years during the early 1970s. The novel's primary setting is Los Angeles, California, with a strong focus on the filthy apartment of Henry Chinaski, the protagonist and narrator. Henry is a fifty-year-old alcoholic. After spending several years working as a clerk in the United States Postal Service, Henry quits his job to pursue a full-time writing career as a minor poet. Eking out a subsistence living by selling poems and editing little magazines, Henry drinks and stares at women.

Eventually Henry's publications garner some minor attention and at the commencement of the novel's principle timeline Henry has several volumes of collected poetry in print. He begins to give public readings and his notoriety as a drunk spreads. He then meets Lydia Vance, a woman about half his age, and begins a prolonged love affair with her, which endures many fights, several extra-relationship affairs by both partners, and months of hard drinking. As Henry's fame continues to increase, his ability to have sex with additional women becomes manifest. Lydia's mental state degenerates and she becomes more violent and much more jealous Finally driven over the edge by yet another of Henry's affairs, Lydia flies into a violent rampage and is arrested. Henry declines to press charges but their relationship is effectively terminated.

Henry then begins a prolonged series of sexual adventures with a variety of young attractive women. This pattern consumes the bulk of the narrative development and varies only in the minor details. n general, Henry meets a young attractive woman and the woman flings herself at Henry. Henry has enthusiastic sex with her and the woman is then discarded for the next cycle. All of the women except one are described as more beautiful than the last and more sexually perverse or adventuresome than the last. In general, each is also younger than the last although this is not always true. Throughout all of the affairs, Henry continues hard drinking, constant vomiting, and an attachment that borders on obsession to his filthy apartment.